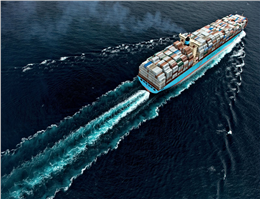 MAERSK is set to return to the UK port of Liverpool after more than a decade hiatus through its intra-European shortsea subsidiary Seago Line.
From April, feeder specialist Seago Line will provide a direct service between the British Isles and Spanish transhipment hub Algeciras, where customers will be connected to markets in North Africa and the Mediterranean.
The new Seago service will also call at the port of Dublin, representing the Maersk Group’s first ever direct call in the Irish capital. This will supplement the existing Latin American service to Cork operated by sister carrier Maersk Line and provide shippers with an alternative from the current feeder option from Rotterdam in Europe’s northern range.
In a joint statement, Maersk Line and Seago said the new service will allow for “easier access to other trades and helps sister companies Maersk Line and Safmarine deliver for their customers in the North West of England and Ireland”.
They added: “Most notably, the new shortsea service creates a great opportunity for a West Africa product offering with a new transhipment option to connect both markets to Nigeria.”
The service’s maiden call in Liverpool is scheduled for April 13 before calling Dublin on April 14. The loop will offer six-day transit times between Algeciras and Liverpool.
A spokesman for Maersk told Lloyd’s List the size of the vessels Seago plans to use for the service will be confirmed at a later stage.
The news that Maersk is set to return to Liverpool from next month will certainly be music to the ears of shippers in the northwest of the UK that have long called for greater liner coverage in the region.
Not only will the offering provide them with access to new markets but it could also be a sign that the Danish shipping conglomerate’s container segment is looking to enhance its presence at the port.
Last week, at a reception at the Houses of Parliament by the River Thames to promote Peel Ports’ Liverpool2 development, the port operator’s much-anticipated new £300m ($420.7m) deepwater container terminal, shippers urged the big global lines that currently call at ports in the southeast of the UK, namely Felixstowe and Southampton, to consider deepsea services to the northwest.
They believe the new terminal — the first phase of which is expected to open around October this year — will provide the larger carriers with the ideal platform to add Liverpool to its Asia-Europe network, as the port will soon be able to handle vessels of 13,000 teu or more, compared to the 4,000 teu ships today. Maersk Line was singled out in particular as one line they would like to see make the switch.
Seago Line calling Liverpool may not be the major Asia-Europe call from the industry bellwether Maersk Line that shippers crave, but it is certainly a step in the right direction and a vote of confidence from the Danish group for future growth in its business in Liverpool.
0
Visit Home
Send to friends
Print
Newsletter
Share this news