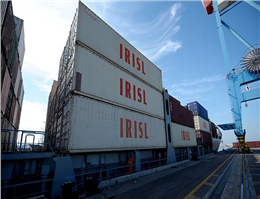 The MSC Domitille reinaugurated the line's service to Iranian ports at New Years', following in the wake of CMA CGM and CSCL, which both resumed service earlier in 2015. CMA CGM has gone so far as to enter into a joint agreement for sharing vessel capacity and port facilities with Islamic Republic of Iran Shipping Lines (IRISL), an arrangement similar in structure to a traditional shipping alliance.
Additionally, on Sunday, IRISL announced that it had dispatched an Iranian-flagged container vessel bound for European ports, “the first time in five years of sanctions;” IRISL did not say which ports the ship would visit. IRISL has also recently gained representation by liner agents PWL of Germany.
IRISL Managing Director Mohammad Saeidi told media that the firm is now planning regular service from the Persian Gulf to Latin America and East Asia, plus – if the Canadian government lifts sanctions – service to North America.
IRISL presently has container tonnage totaling to 100,000 TEU, according to Alphaliner, with plans for ordering many thousands more.
Separately, Deputy Petroleum Minister Amir Hossein Zamaninia told reporters on Monday that a Saudi-led initiative to freeze oil production at January levels was “a small step in the right direction,” but Iran will still be focused on boosting its output. “We hope that [other oil exporters] can get together to decrease their production,” he said, and reiterated Iran's position that it has the right to regain levels of petroleum exports similar to those it enjoyed in the pre-sanctions period.
Shipments of Iranian oil to Europe restarted in mid-February with one tanker for French firm Total SA and for two others. Insurance – specifically, insurance for catastrophic loss – remains a challenge for Iranian oil shipments, at least until the International Group of P&I Clubs can clarify remaining American sanctions on the reinsurance of vessels carrying Iranian crude.
0
Visit Home
Send to friends
Print
Newsletter
Share this news