LIVORNO Port Authority has issued a tender for design, construction and operation of its new deepwater container terminal at the port in its attempt to position itself as an alternative gateway to Europe. 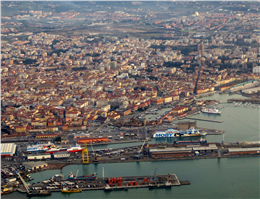 LIVORNO Port Authority has issued a tender for design, construction and operation of its new The port authority first unveiled plans for the €800m ($870m) project in November 2015.
The concession term is 50 years with the starting bid price at €504m.
All interested parties have until March 22 to submit bids after which negotiations with leading bidders will take place followed by the contract signing.
Livorno Port Authority expects the new, 72 ha terminal to be open for operations by 2020 and will feature than 1,000 metres of quay capable of handling vessels with capacities up to 16,000 teu.
Livorno Port reported handling 33m tonnes in freight volume in 2015.
In total, the port handled 780,000 teu in 2015, a 35.2% increase from 2014.
Liquid cargo volumes increased by 14.3% in 2015 compared to the year before, while dry bulk cargoes segment saw a 1.2% fall.
Port authorities said elevated demand in the US east coast trade and the adding of new line services by CMA CGA and United Arab Shipping Company calling at Livorno fuelled growth in 2015.
0
Visit Home
Send to friends
Print
Newsletter
Share this news