APM Terminals' Suez Canal Container Terminal is set to gain from the opening of the eastern side channel approach, which will allow vessels direct access to SCCT and the East Port Said development area. 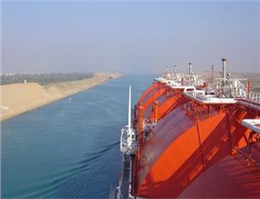 The new channel, which will be officially opened by the Suez Canal Authority on Wednesday, will save an estimated 8-10 hours waiting time off voyages to East Port Said.
Due to draught constraints in the approaches from the Mediterranean, vessels entering the canal previously could only join through two prescribed approaches.
Vessels destined for SCCT, which uses another entrance, had to wait until ships going straight to the canal had passed before they could enter East Port.
Because of the canal’s convoy system, which bunched together six southbound vessels, this could lead to vessels heading for East Port Said waiting for up to half a day.
The problem has now been solved by the dredging of a new eastern approach channel, something that was agreed with the Egyptian government in the original concession for East Port.
The channel, which has been dredged to 18 m, will allow direct access from the open sea. Vessels calling direct SCCT will then be able to join the main canal, or return directly to the Mediterranean.
The side channel was due to open by 2012, but the political disruptions in Egypt since 2011 had delayed the plan.
Without the new side channel, growth at SCCT would remain constrained, SCCT chief executive Klaus Holm Laursen told Lloyd’s List last year, before the opening date was confirmed.
“If Egypt does not go ahead with this we will not be able to handle any more traffic here,” he said. “Without it, the East Port development will not fly.”
Announcing the approach channel’s opening at a conference in Cairo today, Suez Canal Authority chairman Mohab Mameesh said the improved access would turn East Port Said into a logistics hub and could double capacity at the port and logistics centre.
East Port Said, which is sited on the Sinai side of the canal, has been hampered in recent years by poor-quality access across the canal since the following the closure of the Al-Salam bridge for security reasons. Despite being pitched as a major logistics facility, to date SCCT is the only tenant.
0
Tags: Suez Canal
Visit Home
Send to friends
Print
Newsletter
Share this news