The Iran and Norway trade opportunities conference was held on Wednesday February 17th in DNV-GL Co. headquarters in Oslo. This gathering was coordinated with the Islamic Republic of Iran's embassy and Norway's State Department. 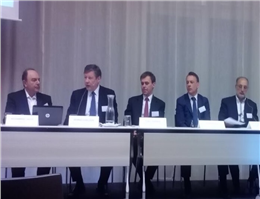 The Iran and Norway trade opportunities conference opened on Wednesday February 17th in Oslo, MANA reported, with the participation of Dr. Majid Takht-E-Ravanchi (Europe and America Deputy to Iran's Secretary of the State), Ms. Tone Skogen, Norway's Deputy Secretary of the State, Dr. Mohammad Saeedi (the President and the Chairman of the Board at Islamic Republic of Iran Shipping Line), and a delegation of Iranian merchants, economic and industrial activists and 67 Norwegian companies.
As the first speaker for an Iranian company in this conference, Dr. Saeedi elaborated on the capacities, facilities and the future development plans of the IRISL.
As part of this conference, the report added, Norwegian companies that operate in various transportation and maritime sectors sat with IRISL's President and exchanged opinions regarding mutual collaboration in diverse areas such as transferring science and technology, renting ships, constructing vessels, off-shore services and logistics.
The majority of the Norwegian companies expressed their interest to pursue the negotiations in Tehran. Meanwhile, the president of Norway's Ship Owners's association   invited IRISL's President to meet with its members in his future visits to Norway. Moreover, the Norwegian Ulstein Design & Solutions Co. invited Dr. Saeedi to visit its facilities, its second-to-none designs and its innovation technology on its company premises in Ulstein.
Ulstein Design & Solutions Co. has in mind to pay a visit to  Persia Hormoz ship repair yard  Co. in order to survey the possibility of ship construction in Iranian shipyards, and transfer technology in diverse fields – namely information technology and vessels' controlling systems.
Among the other prominent figures attending this conference are Seyed Mohammadreza Ayatollahi (the C.E.O. of Social Security Investment Co.), Dr. Farhad Sharif (Iran's Chamber of Commerce Deputy to International Affairs), and several other economic activists. Moreover, a report on the post-sanctions era opportunities was submitted between the two nations so as to promote mutual collaborations.
It should not be left unmentioned that DNV-GL, as the largest IACS-member classification institute, announced its reopening of its office in Tehran, and as well, expressed its interest in offering its services to Iranian companies.
0
Visit Home
Send to friends
Print
Newsletter
Share this news