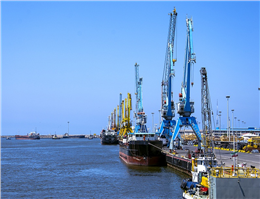 Acting as the head of an investment delegation, MANA reported, the representative of this Dutch company requested Gilan Province Ports and Shipping Organization's Director to allow their cooperation both as a transportation investor; and in the port's structures and infrastructures.
Gilan Province Ports and Shipping Organization's Director explained the trends of developing the infrastructures of the ports in the vicinity of Caspian Sea, particularly the export of goods from Caspian Sea to Anzali, Bandarabbas and Europe. Given the field visits of this company’s representatives from the port and the decisions made in Anzali Port’s management office, he added, the perspectives were submitted and the final result will be announced after the necessary investigations.
With reference to the role and the position of Anzali Port in North-South Transport Corridor, Mr. Naeemi remarked that Anzali port is the oldest port in the coast of Caspian Sea, and it is deemed as the pilot of this corridor.
He further stated that Anzali port is located in an excellent geographical and strategic position in that it is close to the capital city, and it has easy access to transport goods to the west and north west of the country. Moreover, in the near future, the launching of Anzali Port railway will promote the position of this port even further.
After the nuclear agreement of Iran and 5+1, Mr. Naeemi stressed, the port has become more active, and Asian as well as European companies have expressed their interest to invest in this port or trade with it. Besides, Anzali port is the only available port for the transit of petroleum products to Iraq and Turkey.
Later in this meeting, the representative of the Dutch company expressed his interest in the issues discussed in the meeting, and briefed the participants regarding the activities of his company in the field of goods transport and direct entrance to Iranian market.
0
Visit Home
Send to friends
Print
Newsletter
Share this news