The first transit railway of Silk Road reached the destination this morning. 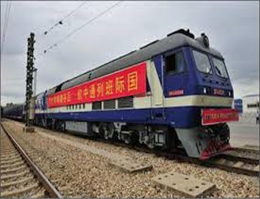 MANA reported that based on the trilateral agreement among Iran, Turkmenistan and Kazakhstan, the first pilot train entered Tehran's railway station from China earlier this morning.
Based on this, the first transit Silk Road train entered Tehran after passing 10,399 kilometers of route in 12 days, two days earlier than its expected deadline.
This train carried 32 forty-foot containers of commercial goods from the city of Yiwu in Zhejiang province, eastern China. Based on MANA's report, this is the first cargo train that connects China to the Middle-East and Iran.
This train passed through Aletai region in Xinjiang, China, and after passing through Kazakhstan and Turkmenistan, it entered Iran through Sarakhs Route. This train is supposed to enter Iran from Incheh-Boroon railway terminal in the future
0
Visit Home
Send to friends
Print
Newsletter
Share this news