<![endif]--> The Growth Of Exports From Pars Customs

The Growth Of Exports From Pars Customs

The general director of Bushehr Province’ s Customs stated: South Pars Customs witnessed the export of 19.794.000 tons non-petroleum goods from April 2015 to January 2016,which this figure highlights a 10-percent ascent in comparison with the same period in 2014. 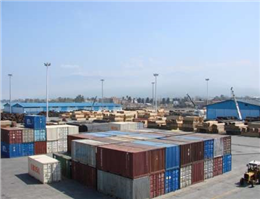 Stating the increase of goods exports from South Pars Zone, Ahmad Pourheidar stated to MANA correspondent, launching a comprehensive system in Bushehr Province 's Customs has paved the way for prompting the maritime trade, in a way that, goods owners could carry out their trade activities with provided facilities, while their presence is not obligatory, he continued.
Referring to the 10-percent rise in the exports of South Pars goods ,Ahmad Pourheidar remarked: South Pars Customs experienced the export of 19.794.000 tons non-petroleum goods which reach approximately the value of 10 billion and $123 million from April 2015 to January 2016.
Counting export goods from South Pars Customs as gas condensates, ,petrochemical products, sulphur. butane, propane, The general director of Bushehr Province’s Customs further stated: these goods and products have been exported to 29 Asian, European and African countries .
Pointing out that gas condensates are considered as the first export goods from Pars Customs
Stating that South Pars Customs holds the top position among other Iranian Customs, Ahmad Pourheidar reminded: in the last year, Pars Energy Economic Special Zone has seen the export of over 21 million tons goods abroad with the value of $19bn,which this figure has placed South Parse Customs in the first ranking of exports in Comparison with other Iranian Customs .
Announcing the increase of non-petroleum goods in the post-sanctions era, the general director of Busher Province Customs stated: given the promotion of trade ties and relationships with other countries, it is speculated that a striking growth would take place in the exports of goods abroad in the post –sanctions era.
0
Visit Home
Send to friends
Print
Newsletter
Share this news