Iran's first sea hotel will be inaugurated on Kish Island later this week. 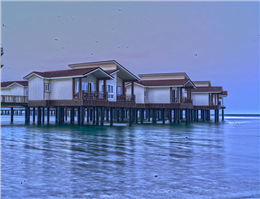 The chairman of Kish Island's Hotel Owners' Union announced that Iran's first sea hotel will be inaugurated on Kish Island at the presence of official figures on February 11th.
Masihollah Safa stated to MANA reported that the sea hotel has been constructed in villa style on water in form of a bergamot.
This private-sector tourism activist on Kish Island also remarked that the environment of this hotel will inspire the atmosphere of Venice in guests' minds. He added that the construction of Toranj Sea Hotel had commenced in 2012 by the full investment of private sector.
The chairman of Kish Island's Hotel Owners further stated that the Toranj Hotel's three-year period of construction is an acceptable time span in comparison to other hotel construction projects.
Regarding the characteristics of this hotel, he added that Toranj hotel possessed 102 on-the-water suites and a luxurious restaurant that is located in the middle of the bergamot design, and this could be very attractive for tourists.
He stated that the access route to the rooms of this hotel is wooden boardwalks which connect the rooms. The route that connects the land to the hotel will be a glass boardwalk, which will certainly be very catchy both for domestic and foreign tourists, and will pave the way for the attraction of tourists.
Moreover, the chairman of Kish Island's Hotel Owners stressed that Kish Toranj Sea Hotel will start its operation with 5 stars. Hence, all the services offered in this hotel have to measure up to the standards and the qualities defined for 5-star hotels.
He speculated that once this hotel is inaugurated, its rooms will be fully booked by the end of Norowz vacations this year.
Safa added that toranj Hotel has been designed in two phases of land and sea. The land phase is currently being constructed on the shores across from the sea phase. Up to the end of the year, another hotel will be ready to open.
Stating that 50 hotels are currently active on Kish Island, he stated that the mentioned figure will rise to 52 once these hotels are inaugurated by the end of March 2016.