On Monday morning, a four-man team from SMIT Salvage successfully passed a tow line from the stricken ro/ro Modern Express to the tug Centaurus. As of Monday afternoon, the tow was under way, headed away from the French coastline and making for the Port of Bilbao. 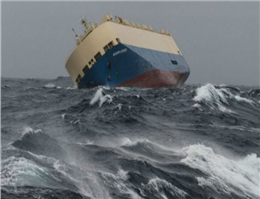 Monday's effort was considered the last possible attempt to establish a tow before the Express went aground. She was only 25 nautical miles from shore. Improved weather conditions Monday made the successful operation possible.
The team left the Modern Express by helicopter for the French Navy frigate Primauguet.
On Sunday, weather conditions deteriorated, with wind gusts to 45 knots and waves to 18 feet, prohibiting salvage efforts. The listing ro/ro was making about 2 knots towards the French coastline, drifting faster with the increased wind speed.
Vice-Admiral Emmanuel de Oliveira, maritime prefect of the Atlantic region, told media yesterday that if the effort Monday were not successful, the vessel was expected to run aground Monday night or Tuesday morning on sandy beaches in the region of Landes.
No hull breach or pollution has been reported, and even if she had grounded, her tanks contained in the range of 300 tons of fuel, a manageable amount in the event of a release, he said.
An attempt last week to establish a tow was thwarted by heavy swells and the motion of the Express and the salvage tug; a tow line was passed, but it parted under tension, and the salvage crew left the Express as nighttime approached.
Spanish Coast Guard assets rescued the 22-member crew of the listing ro/ro last Tuesday evening and brought them safely ashore.
The Express issued a distress signal when she was 130 nm off Cape Ortegal, Galicia, in the British zone of SAR responsibility for the Bay of Biscay. The evacuation was carried out by Spanish authorities, who provided three helicopters and one patrol aircraft.
The Panama-flagged, 10,000 dwt Modern Express was under way from Gabon to Le Havre with cargo of "3,600 tons of wood in bundles and a dozen pieces of heavy machinery" at the time that she began to list, French authorities said. As of Wednedsay morning, she had drifted into French waters.
The Express is owned by Cido Shipping and operated by European Roro Lines, a specialist in ro/ro cargo to West Africa from Northern Europe.
0
Visit Home
Send to friends
Print
Newsletter
Share this news