CMA CGM teams up with IRISL to grow Iran market

Memorandum of understanding covers space sharing on each lines' ships 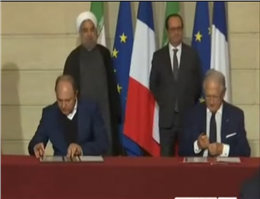 CMA CGM has signed a co-operation agreement with Islamic Republic of Iran Shipping Lines following the partial removal of sanctions on Iran.
The French line had already resumed services to Iran and now hopes to develop this market further by teaming up with IRISL.
The memorandum of understanding, which was signed on Thursday during a visit to Paris by Iranian President Hassan Rohani, provides for exchanges of shipping space on vessels of both groups, CMA CGM said in a statement. The agreement is subject to full compliance with any continuing international sanctions. No further details were immediately available.
A number of global lines have resumed services to Iran in recent weeks and months, the notable exception so far being Maersk.
CMA CGM resumed Iran calls last August. It now has three services linking Iran to Africa, Asia, and India, with transshipment at Jebel Ali to reach northern Europe and the Mediterranean.
Ocean Three partner United Arab Shipping Co announced earlier in the month that it was re-starting Iran calls.
In an interview wth Lloyd's List last October, IRISL’s chairman and managing director Mohammad Saeidi outlined plans for IRISL to upgrade its fleet as it returns to the global trades. He would not be drawn on tonnage specifics. and has been quoted as stating that the company could be ordering panamax vessels, 14,000 teu and even 18,000 teu tonnage to take on the top players. Bu he suggestd to Lloyd's List that 10,000 teu-class ships were more likely to be the target, with final decisions to be made fairly soon
0
Tags: CMA CGM
Visit Home
Send to friends
Print
Newsletter
Share this news