IALY-based Fincantieri has signed a number of framework agreements to explore opportunities in Iran’s shipping industry. 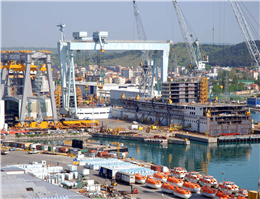 The preliminary agreements were inked in the presence of Italian prime minister Matteo Renzi and Iranian president Hassan Rouhani on his official visit to Italy.
A key deal with Azim Gostaresh Hormoz Shipbuilding Industry will see both companies collaborate to build new merchant vessels and offshore units, carrying out shiprepair and conversion projects as well as refitting activities of vessels already in operation.
Fincantieri will contribute in the area of detailed engineering, construction process optimisation, technical consultancy and also assist in all vessel production phases as well as personnel training on site and in Italy.
To achieve this, both companies will set up working groups to enhance co-operation and create business partnerships in the field.
AGH has a shipyard located in the Middle East Gulf within Iran’s special economic zone and is a unit of Iran Shipbuilding and Offshore Industries Complex Company which is itself a subsidiary of conglomerate Industrial Development & Renovation Organization of Iran.
The group’s subsidiary Isotta Fraschini Motori has also inked an agreement with Iranian trading company Arka Tejarat Qeshm to explore a joint proposal to supply 600 marine engines for smaller vessels.
Another agreement the subsidiary signed in partnership with Titagarh Firema Adler, a railway rolling stock manufacturer, was with Wagon Pars Co which handles railway vehicle construction in Iran. Similarly, the deal calls for the development of a joint proposal to supply Iranian Railway with 70 shunting locomotive engines.
“We have once more demonstrated the ability to attract the industrial interest of one of the countries with the highest development potential in the world,” said Fincantieri chief executive Giuseppe Bono.
“The agreement which we have achieved thanks to the company's presence in all the areas of the shipbuilding and advanced manufacturing industry, will surely represent an added value of utmost importance to increase the worldwide dimension and the export share of our group”.
The lifting of sanctions on Iran has also led Chinese shipyards to send trade representatives there in search of newbuilding orders
0
Visit Home
Send to friends
Print
Newsletter
Share this news