CHINESE yards have sent their trade representatives to Iran, in a bid to snatch a share of the country’s potential wealth of newbuilding orders following the lifting of western sanctions. 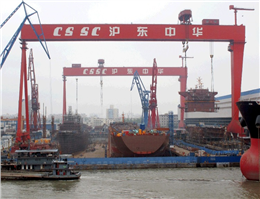 CHINESE yards have sent their trade representatives to Iran, in a bid to snatch a share of the country’s potential wealth of newbuilding orders following the lifting of western sanctions.
Speaking during the naming ceremony for its fifth medium range tanker built for Stena, CSSC Offshore & Marine Engineering chairman Han Guangde told Lloyd’s List that the company’s president and his team have arrived in Tehran on Tuesday, and will hold talks with the local shipping giants.
Shanghai- and Hong Kong-listed CSSC OME, formerly known as Guangzhou Shipyard International, is a major tanker building unit of the state conglomerate China State Shipbuilding Corp.
“I can’t say we’ll sign any deals,” Mr Han said, “but it’s a good opportunity for us because our main business is building tankers.
“Our focus this time is product tankers and VLCCs.”
Mr Han’s remarks came not long after a recent press conference held by the National Iranian Tanker Co, in which managing director Ali-Akbar Safaei said that his company is expecting to renew its fleet via buying or building up to 25 new tankers.
Also, the Islamic Republic of Iran Shipping Lines has said it is looking to add 579,000 teu of containerships, 2m dwt of dry bulk vessels and 1.6m dwt of tankers by 2020.
Mr Han said his yard had built vessels for Iran in 1990s. “We have the experience of communicating with the Iranians. And I believe we can get good co-operation,” he said.
Meanwhile, several Shanghai-based ship brokers told Lloyd’s List that quite a few other Chinese yards have also sent people to Iran to discuss possible orders in addition to CSSC OME.
One broker said that NITC has showed strong interest in ordering ships at Chinese yards and his peers have been working hard to bring about agreements between the two parties.
In an October interview with Lloyd’s List, IRISL’s new chairman and managing director Mohammad Saeidi said that this country had built up over $120bn in funds internationally that were expected to be unfrozen once sanctions are removed.
Iran is to use these funds to place newbuilding orders, predominantly in China, where Dr Saeidi suggested that existing relationships with China and its banks would allow IRISL to place favourable orders at Chinese yards.
Last week, Ali Rabiei, the Iranian minister of co-operatives labour and social welfare, told local media Fars News Agency that a Chinese bank intended to offer a $5bn credit for the country’s fleet expansion scheme.
0
Visit Home
Send to friends
Print
Newsletter
Share this news