The director of Ports and Shipping Organization of Shahid Bahonar port announced that over 1,620,000 tons of petroleum and non-petroleum goods were embarked and disembarked from this port from March to November 2015. 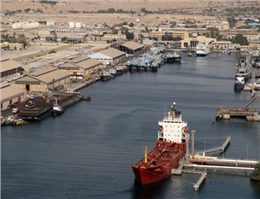 Mohammad Mohseni, MANA reported, submitted a report on the operation of Ports and Shipping organization of Shahid Bahonar from March to November 2015, and announced that in the course of this period, 1,298,368 tons of non-petroleum goods and 1,321,829 tons of petroleum goods were transported. In the petroleum section, he added, an 11-percent increase could be reported.
The director of Ports and Shipping Organization of Shahid Bahonar Port pointed out that 1,092,569 tons of non-petroleum goods as well as 79,823 tons of petroleum goods were exported from this port from March to November 2015. In the non-petroleum and petroleum goods, he added, 11 and 113 percent of increase was observed, respectively.
This authority added that chemical material, agricultural material, minerals, tar, fruits and vegetables, protein products, ironware and construction material were the main goods that were exported from this port to Arab states of the Persian Gulf and countries in the Indian-Ocean region. He added that 389 refrigerated TEU containers were exported to UAE since March 2015. Since March 2015, he added, , 94,724 tons of non-petroleum goods were transited from this port, most of which were cars.
Mohseni announced that over 2,644 vessels have been transported to and from this port from March to November 2015, and this figure depicts a 9-percent rise in the reception of vessels.
From March to November 2015, a total of 1,975,000 passengers were transported via Shahid Bahonar and Shahid Haghani Ports, further stated the director of Shahid Bahonar Ports and Shipping Organization, and of this figure, over 26,000 passengers were carried to Arab states of the Persian Gulf via sea routes .
Shahid bahonar Port is located in the central region of Hormozgan Province, and with the waterline of deeper than 10 meters, it has the deepest waterline among Iranian ports, first and second only to Imam Khomeini Port and Shahid Rajaei Port,respectively .
Five percent of exports, imports and transit operations of the country is done through this port.Access to international waters via Persian Gulf, Connection to the international railwaynetwork,connection to international network of roads, close distance to Qeshm Free Zone and Persian Gulf Trade Ports could be counted as exclusive features of Shahid Bahonar Port.
0
Visit Home
Send to friends
Print
Newsletter
Share this news