The International Summit of North South Transport Corridor (NSTC) was held with the attendance of senior authorities and representatives from Azerbaijan and Iran. 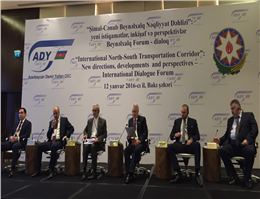 In a telephone interview with MANA reporter, the managing director of the Caspian Sea Shipping Lines stated that senior authorities and representatives from Iran and Azerbaijan, including the directors of the ports of both countries, the director of Iran-Azerbaijan Railway, and Georgia-Ukraine Transportation Representative attended this summit.
Ali-Akbar Ghonji outlined that the main objective of this summit was to discuss and find the best means of transporting containers from India to Ukraine by sea, railway and roads. He further remarked that discussing using North South Transport Corridor to transfer goods from Europe to the Indian Ocean and the Suez Canal was among the other aims of holding this summit.
Another issue discussed in this summit was using the Persian Gulf-Azerbaijan-Georgia route to connect to Europe, which will reduce the transportation time to 40 percent (from 35 days to 19 days), reported Ali-Akbar Ghonji.
According to the managing director of the Caspian Sea Shipping Lines, the role of Iran in the NSTC was emphasized in this summit. By offering top notch ideas and commentsin this summit, he added, the authorities of Islamic Republic of Iran Shipping Lines (IRISL) emphasized the utilization of the capacities of IRISL both in the Caspian Sea and in the southern waters.
In supplying their necessities from the Far East, he further announced, the Ukrainian Party is attempting to eliminate the Russian Route from NSTC.
It should not be left unmentioned that Georgia and Azerbaijan play the most paramount role in the NSTC.
0
Visit Home
Send to friends
Print
Newsletter
Share this news