<![endif]--> Shanghai the Best Port in the World

Shanghai the Best Port in the World

Shanghai was selected as the busiest port in the world in 2015. 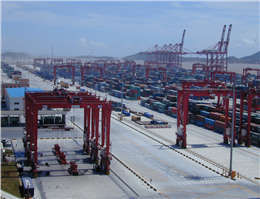 According to MANA reporter, Shanghai Port in China managed to transport 36.54 million TEU and become the world's most crowded port in 2015.
Based on this report, the volume of transported goods from this port – 35.29 million TEU – was on the top of the world's ports, and yet, Shanghai managed to promote this figure as much as 3.5 percent and place on the top position in the chart again in 2014 with 36.54 million TEU.
Singapore Port, which is the tightest rival for Shanghai Port, has not released its transportation volume in 2015 to the press, yet we do know that it has transported 28.41 million TEU in the first 11 months of 2015.
Given the released statistics, it is impossible for Singapore Port to have transported 8.14 million TEU in the last month of 2015 and got ahead of Shanghai.
In December 2015, Shanghai transported 3.07 million TEU, which depicts a 5.9-percent increase compared to the 2.9-million TEU transported in the same period in 2014.
Meanwhile, SIPG Terminal Operator announced that they had earned a net profit of 6.5 billion Chinese Yuans in 2015, which equals 988.7 million Dollars, and depicts a 4-percent decrease compared to last year's figure of 6.77 billion Chinese Yuans.
Overall, the revenue of the operator of Shanghai port was reported to be 29.5 billion Chinese Yuans, which demonstrates a 2.5-percent increase