MANA acheived a chance to have an interview with Sergei Shumskikh as the representative of Nevsky shipyard . 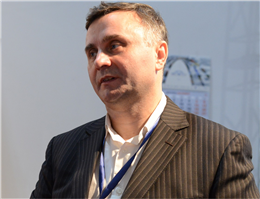 Located in “Volga-Baltic Waterway” where both in-land navigation and international port of St.-Petersburg, Nevsky shipyard enjoys a strategic location.
The construction of Russia’s Old Ladoga Canal – the largest hydraulic structure of Europe in 1719 laid foundation of Nevsky Shipyard’s history. Over the years the cargo traffic through the canal increased rapidly, necessitating the repair and maintenance works of passing vessels and leading the establishment of the Shliesselburg ship repair workshops in 1913, which became the modern Nevsky Shipyard. Nevsky is certified by leading class societies including the Russian Maritime Register of Shipping, Russian River Register, Lloyds Register of Shipping, Bureau Veritas, Germanischer Lloyd and Det Norske Veritas.
Here is a rare interview with Nevsky Shipyard with MANA :

• As you are aware of, after the nuclear deal and even before the implementation day, many companies rushed into shipping companies and IRISL in particular for marine cooperation. Does your esteemed company have any plan for Iran accordingly?
Our company operates in a wide spectrum of maritime activities such as building a variety of ships including cargo ships, rescue ship, tankers, navy ships, tug boats, sea-going barges and , as well, repairing and remodeling. In the company, there is a cycle of building the ships and operating them in different marine routes while there are provided with great maintenance. We
can offer any of the services to Iran.
However, owning the experience of modernizing the old ships, we suggest this plan to fit the best for Iran. Iran actually operates old ships which have been away from today’s standards during the sanctions against Iran. Hence, Iran needs to modernize its ships especially when the plan in this country, according to Dr. Saiedi, is to enter international market and resume IRISL place in the world.
In fact, the process of modernizing the old Iranian ships pertains to the navigation system in particular. Since the navigation system in the ships plays a fundamental role in shipping and needs to meet the standards, they place within the high priorities in modernizing the Iranian fleet.
Renewing the old Iranian Ships
• Renewing the Iranian old ships sounds sufficient for the time being; however, what are the conditions, regulations or plans of your company for this project in Iran?
Nevsky company is specialized in this realm. Our company enjoys DNV certificate to replace the old equipment and modernize the ships. We need to work under the regulations and standards of Russian and DNV class to accomplish this. However, personally speaking, I do not think the standards and requirements coincide with Iranian standards.
Furthermore, the Russian experts can come to Iran to accomplish the plan of renewing the navigation systems and that is what we did in China. Our team of experts went to China to modernize the navigation system in a Chinese ship.
• Do you have any special plan for Caspian Sea and the shipping in this route regarding Iran?
Actually yes, we have the experience, technology and are moving forward with the projects in Caspian Sea. Therefore, we are experienced enough to supply the Iranian fleet in this sea with modern equipment.
The other opportunity is to provide the required technology for shipbuilding in this area for Iran. We also can renew and modernize the Iranian old ships in Caspian Sea along with building the rescue ships and offshore rigs in Caspian Sea.
As the Iranian maritime authorities are aware of, Iranian fleet requires rescue ships and building this kind of ships is one of our professions.
• Is there any plan for investing in Iran?
It is actually too early to comment inasmuch as the payments and bank transfer is a big headache for foreign parties pertaining to Iran.
Yet, the good news is that according to the agreements between Iran and Russia, the payments can be accomplished domestically. This point strongly facilitates the level of cooperation between the two countries of Iran.
The other good news is that according to the agreements between the two states, the business between Iran and Russia is guaranteed which is another factor to promote the maritime relation between Iran and Russia.

• What are the opportunities for Iran and Russia in the realm of training?
There is a very popular institute for training professional seafarers and engineers and there is a strong relationship between our company and this institute. In fact, the head of our company is one of the members of the board of education in this marine institute. Based on our strong relation with this institute, we can pave facilitate the process for Iranian sailors for higher education in this institute. In past, there have been foreign students in the major of marine management, marine engineering etc. I was actually one of the graduate people from this institute.
• Is there any plan in your company for CIS countries?
We intend to cooperate with Iran in providing ships and apply railroad and therefore, the cooperation can provide multi-modal transportation to transfer the cargo to CIS countries.
• Is there any plan regarding joint venture?
It is possible and much more facilitated compared to investment in Iran to establish a new company in Russia.
• Any other issue to add?
We are going to open a bureau in Bandar Abbas where because there are a number of ship repair and ship building yards in there and additionally it will facilitate the operation and shipping the from Far East to Bandar Abbas and finally to Europe. In fact, we plan to come again to Iran.
0
Tags: INTERVIEW
Visit Home
Send to friends
Print
Newsletter
Share this news