<![endif]--> A 228-PCT Increase in the Foreign Transit from Guilan's Customs

A 228-PCT Increase in the Foreign Transit from Guilan's Customs

In the past 9 months, 245,148,596 million Dollars worth of goods (258,447 tons) were transited abroad from Guilan's Customs. This figure highlights a 42-percent increase monetary-wise and a 228-percent weight-wise compared to the same period last year. 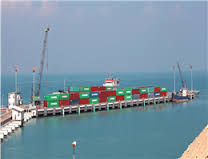 Iranian Customs Supervisor and the General Manager of Anzali Customs stated to MANA Correspondent that in the course of the past 9 months, Guilan's
Customs have been able to make the revenue of 3,987,961,041,000 billion Rials.
Mohammad Shahbazi continued that the mentioned figure highlights a 14-percent ascent in the revenue of Guilan's Customs, in comparison to the past year.
He added that in the past 9 months, approximately 198,233,898 million Dollars worth of non-petroleum goods (311,075 tons) have been exported from Guilan's Customs, including Anzali, Astara and Hassanroud.
This authority of Guilan Province stated that 71,439 tons of the above-mentioned goods have been exported from Anzali Port, 233,312 tons from Astara, and the rest from Hasanroud.
Shahbazi pointed out that grains, mineral products and their derivatives, food products and textiles constitute the majority of the goods exported from Guilan's Customs.
Iranian Customs Supervisor and the General Manager of Anzali Customs asserted that the aforementioned goods have been exported to over 30 countries from Guilan's Customs.
He added that the main targets for the exports of Guilan province were Azerbaijan, Russia, Kazakhstan, Iraq, and Turkey.
Shahbazi also added that Guilan province has made trades with countries such as Gorgia, Kasakstan, India, Ukraine, Germany, Belarus, Armenia, France, the Republic of Moldavia, England, Pakistan, UAE, Malaysia, Iraq, and Afghanistan.
He continued that countries such as Estonia, Czech Republic, Taiwan, and Sumalia have been added to the export targets of Guilan Province in the past 9 months.
0
Visit Home
Send to friends
Print
Newsletter
Share this news