Number of vessels currently in lay-up rises to 303, representing 5.9% of the total containership fleet. 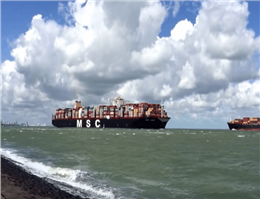 THE idle box fleet has swelled to its highest level since May 2014 as liner operators look to address the issue of industry-wide overcapacity and the softening of global box demand.
Latest figures from Lloyd’s List Intelligence show that as many as 303 vessels, or 5.9% of the total fleet, are currently unemployed, representing 3.8%, or 746,014 teu, of total containership capacity.
A large percentage of this figure however is to be expected given that the winter slack season is now in full swing. Nevertheless, there has still been a significant and much larger than usual rise in the number of inactive ships over the past few months as a consequence of slowing trade growth.
Since the first week of November a further 23 vessels have been added to the list of ships in lay-up, meaning that there the number of idle vessels representative of the total box fleet has climbed by some 2.1 percentage points during this period.
This number would have been even higher if it wasn’t for a rise in the number of ships sent to the scrap yard and those undergoing general repairs.
According to Alphaliner, seven panamax ships of 4,000-5,000 teu have been sold for scraping in the past three weeks, including one that reached only 13 years of age.
The analysts also said that further sales are expected in the coming months, as charter rates hit historical lows.
“Prospects for panamax tonnage are dim and an exodus is expected when the new Panama Canal locks open next year.”
It isn’t just the smaller vessels that are feeling the bite of weak demand however, with no fewer than eight vessels above a capacity of 10,000 teu currently at anchorage.
In the 10,000 -12,999 teu size range there are four ships in lay-up and another four ships above 13,000 teu out of employment, including the 14,000 teu MSC Camille, which has remained in Yangshan, China since the middle of last month, and the 13,092 teu Maersk Emden, which has been in motionless in Shanghai since the end of October.
The vast majority of ships currently out of service are indeed located in the Far East-China Sea region. Here there are 82 vessels in lay-up, representing 39.2% of the total idle fleet, while in the Far East/Asean region there are 67 static vessels, as the intra-Asia trades continue to feel the brunt of slowing growth in the Chinese economy.
0
Tags: idle containers
Visit Home
Send to friends
Print
Newsletter
Share this news