Officials of the Vancouver Port announced that this Canadian Port will be able to host giant ships with capacities up to 18,000 TEU in the near future. 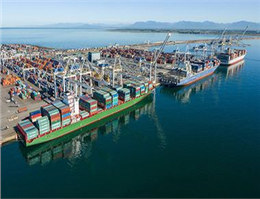 MANA International Group reported that equipping Vancouver Port with two ship-to-shore container cranes would pave the way for this port to harbor giant ships of up to 18,000 TEU
Next week, Benjamin Franklyn 17,700-TEU container ship will dock to the Los Angeles Port in California.
In order to keep their rivalry track with their American competitors, Canadian officials have decided to construct the necessary infrastructures to harbor giant container ships.
The two aforementioned ship-to-shore container cranes were built in Shanghai Zhenhua Heavy Industries Co. Ltd., which is the largest crane producer in the world. Each of these cranes has an outreach of 23 rows across, and the two are among the largest cranes in North America.
As the operator of this port, Global Container Terminals Co. (GCT) is expecting to receive these two cranes by the late 2016.
It should not be left unmentioned that this company is also in charge of operating two terminals in New Jersey and New York ports.
0
Visit Home
Send to friends
Print
Newsletter
Share this news