<![endif]--> Ship Breaking Around The World

Ship Breaking Around The World 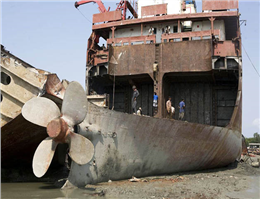 At present, the global center of the ship breaking and recycling industry is in china and south Asia (sub-Indian continent, specifically India, Bangladesh & Pakistan). These four countries along with turkey account for about 98 percent of the international recycling market for ocean-going vessels.
Here is the summarized report of ship scrapping industry discussed for top rated countries except Bangladesh which owns the largest demolition industry in the world.
India
The ship breaking yard at Alang is located in the Saurashtra region of Gujarat off the gulf of Cambay. it was set up in 1983 on a small scale along a 10-km stretch of sandy beach. The tidal , geographical and climatic features make Alang an ideal ship breaking location.
This place has the best continental shelf available for ship breaking in the whole of Asia, at the same time it is known for the highest tidal level (10 meters) in the country. the vast expanse of intertidal zone gets exposed during ebb(low) tide which makes it convenient for ship breaking activity, whereas the high tide makes it possible to accommodate big ships.
According to statistics, total 415 ships were dismantled to catch 38/6 million tonnes of light displacement tonnage (LDT). Normal procedure of ship breaking in sub-Indian continent are same which just require a large winch , some blow torches and bulldozers, rest of operation is just raw human man power, although the way of recycling shall be changed considering new regulations and its implementation which will enforce in near future.
China
In china ships are broken with cranes and machinery equipment, using docks or quay based facilities. This is the only country where ships aren’t beached, these yards and docks mainly situated in two locations–north (Shanghai area) and south (Xin Hui area).
Industry’s key elements are:1) advanced ship recycling market 2) large & emerging capacity
3) volatility Disadvantages :1) high disbursement accounts (D/A) for ports 2) steel price is lower than Indian sub-continent 3)not a keen buyer of specialized ships.
China has been a good choice for owners wanting green recycling also India catching up fast and competition is getting tougher more for those parties interested in with considering implementation of new regulations.
Pakistan
The Pakistan ship breaking industry situated mainly in Gadani , Baluchistan, about 50 km away from Karachi. A 10 kilometer long beach front here play host to as many old and tired ships as need to be. In its heyday this yard provided direct employment to around 30/000 people and was the largest ship-breaking operation in the world, from 1969 to 1983 Pakistan got first place in scrapping industry before entering of other countries to this field, especially Bangladesh & India.
During this time the Pakistani government, for once, showed good business sense and did all it could to help the development of the industry . infrastructures were developed , import duties were lessened and the national ship breaker Association was given a voice.
Turkey
However turkey got the 5th place in scrapping industry but only could capture 3 to 4 percent of total scrapping tonnages.
One of the major ship-breaking sites is in Aliaga, around 50 km north of Izmir. the recycled steel is an important component of the steel supply in turkey , but only recently have the yards begun to care for environmental issues and occupational health. This study addresses these challenges of the Aliaga ship breaking yards, to explore if the recent improvement of the procedure of the yards and Turkish legislation regarding environment, are sufficient to allow Aliaga to claim green recycling.
At the end, the ship breaking industry seems to be an indispensable part of the economy for developing countries since requires a small amount of investment and being mainly dependent on manual labour. From the point of ship owner, it provides a cash flow for the renewal of the fleet, by vessels that can’t be used further due to any reason.
0
Visit Home
Send to friends
Print
Newsletter
Share this news