<![endif]--> The trading gateway to 5 continents

Home home
A
News ID: 59136 |
Another glance at strategic situation of Chabahar,

The trading gateway to 5 continents 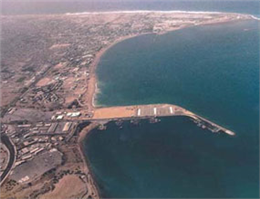 The Eastern side of the country includes part of Chabahar and the network of land roads network which start from Port of Chabahar in Sistan Baluchestan province and , going through the towns such as Nikshahr , Iranshahr , Khash , Zahedan , Nahbandan , Sarbisheh , Birjand , Ghayen , Gonabad , Torbat Heydariyeh , and the holy city of Mashhad ends to the town of Sarakhs from one side , and to border points of Lotfabad , Bajgiran , Parseh soo in two provinces of Khorasan Razavi and North Khorasan from the other.
The exits of this point leading to the border regions joint with Afghanistan , include : Mialk , Dougharoon , Mill and Yazdan. Some economists believe that economic leaps of developed countries are due to optimized policy- making in transportation –related affairs. Transportation is so significant that economic specialists and experts as well as those researching in the field consider that as the a country’s main body of development. Iran , our beloved country , has lots of active potentials in the field of transportation .
The Islamic Republic of Iran is in fact a communicating bridge between Asia-Europe and the Middle Asia with International Waters , and since it has a special geographical situation , it can play a major role in transporting goods by land , air and sea . This distinguished situation Iran enjoys in the region has been further highlighted due to recent geopolitics changes in the region during the last few years , so that good conditions have now been provided for the transit goods and more dynamism of local markets as well .
Following the imposed war, all-round efforts as well as huge investments were made in order to develop communications and transportation networks so that the Islamic Republic of Iran could provide the countries in the region with it’s transporting potentials and the affair of issuing transit services might be able to achieve a deserved place internationally. Due to recent investments having been made and the facilities provided in all fields of land , air, and sea transportation , presently all the countries , from those in the region of south of Persian Gulf to the Central Asia , Caucasus and Baltic Sea region , as well as those from East to West of Asia can assuredly select Iran as a good sea route for the transportation of their exporting and importing goods.
Transportation sector basically plays a vital role in developing countries . On one side , the north-south corridor , both in the country and internationally , north-south international corridor including ; the communicating ways between countries in north of Europe , Scandinavian region as well as Russia through Iran with those countries in the Persian Gulf, India Ocean and east-south of Asia , and on the other side , the north-south corridor in Iran connecting the town of Sarakhs to Chabahar region , all imply the recent significance of East of Iran in the present geopolitics and geostrategic environment in the world. On the other hand , port of Chabahar , is actually a strategic port and the gateway of north-south corridor in the country . This port , having been connected to the border of Turkmenistan , especially where it has a common border with Bajgiran , is regarded as the shortest land way for transporting goods in the eastern corridor and the main way by which Middle Asian countries are supplied and provided.
Chabahar and Sarakhs are two strategic points where India Ocean has been linked to Middle Asian countries in these two main routes. The distance of north-south corridor is 8500 KM long and this route is 40 per cent shorter and 30 per cent cheaper as compared to Suez Canal. Port of Chabahar is known as the trading gateway to 5 main continents of the world due to it’s strategic situation , and since it has a sea border of about 300 KM with Makran Sea ( Oman ) is considered as one of the most significant and valuable ports for transiting goods to the countries in north of Iran .
Chabahar Free Zone is one of the 5 main strategic points throughout the world which has the potential of being turned into a Mega port . Since this port has a good situation in exporting and importing of goods , it may be selected as a cheap , secure and more accessible strategic point as compared to other transit corridors in the world , by 11countries ( Especially Middle Asian countries ) with total population of about 700 million people. Chabahar port daily activities increase annually , in such a way that cargoes with total capacity of about 2.5 million tons were loaded and discharged at this port during the year 1386 and this is while the capacity is expected to reach to 6 and even 9 million tons a year once the Development project is fully implemented at this port.
Also this port has a long distance from Hormuz strait and it is so advantageous for this port , especially during the critical situation and wartime , so the enemy won’t be able to cause problems and hindrances for the importing of goods . Port of Chabahar can cover transit and transportation of goods in the Eastern regions of the country potentially. The triangular communications in trading affairs , marine transportation as well as sea ports are considered as principal elements for economic approaches in any country , either those which have access to seas or the countries which have their trades intertwined with marine transportation due to transit of goods in them. Developing of each one of these elements will be effective on another , implying that development of trades in the Eastern regions will bring about chances for creating jobs in the fields of trade , Shipping industry as well as port operation in these regions.