<![endif]--> The English Version of MANA News Agency was Unveiled

The English Version of MANA News Agency was Unveiled

At the presence of Dr. Mohammad Saeedi, the chairman of the board of directors and the C.E.O. of the IRISL, the English version of MANA was unveiled in the 17th Marine Industries exhibition and Conference. 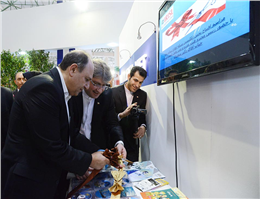 According to MANA, Established in 2004, MANA News Agency was established to reflect the achievements and the abilities of the IRI in the arena of the seas and marine industries. So far, as the first news Agency for Iran’s maritime community, MANA has successfully managed to cover the news and reports regarding IRISL, Iran’s maritime transportation, ports, water tourism, maritime industries, and the like.
MANA News Agency has intended to play a fundamental role in reflecting international activities of national fleet as well as reviving the IRISL brand along with International maritime shipping news, Given the novel approaches that IRISL has opted for under the directorship of Dr. Mohammad Saeedi, today this goal was accomplished by the unveiling of MANA’s English version.
It should not be left unmentioned that the English version of MANA covers all the news pertaining the newest accomplishments and abilities of IRI in the arena of marine affairs.
0
Visit Home
Send to friends
Print
Newsletter
Share this news