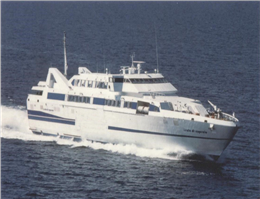 According to Ebrahim Idani, Director General of Hormozgan PMO, in the 8 month period, 11.7 million passengers were transported via sea at Hormozgan province, which shows 2% growth in maritime performance.
According to MANA, Idani emphasized on the crucial role of Hormozgan as the capital of cruising in Iran. "Hormozgan Province enjoys convenient infrastructures, such as 10 Passenger ports and the most advanced passenger fleet in Iran, including more than 80 vessels (landing crafts and cruise ships) with the seating capacity of over 5000.
"95% of local passenger transportation and 100% of vehicle transportation to the islands of Persian Gulf are done through Ports of Hormozgan," He said.
Director General of Hormozgan PMO, said that according to the statistics and analyses, in the first 8 month of the current Iranian calendar year which began on March 21, 11,734,546 travels were done at the ports of Hormozgan without any mishap.
"The number of travels done in the 8 month period shows 2% growth in comparison to the same time last year," he added.
"Because of convenient infrastructure and our safe and standard passenger vessels, there are services to Qeshm and Hormoz islands in every days of the year through Shahid Haghani port at port city of Bandar Abas. There are also vessel services for traveling by car through sea lines of Pohl port and Laft port. There are also services for transportation of passengers and vehicles through ports of Lengeh, Charak, and Aftab," Idani added.
"Hormozgan, as the capital of cruising in Iran, manages millions of tourists and passengers every year. Millions of tourists travel to Hormozgan to see the azure waters of Persian Gulf. Most of the tourists visit Hormozgan in fall, winter, and the beginning of spring which is also the New Year celebration in Iran," he stated.
Increased vessel traffic at trade and passenger ports
Director General of Hormozgan PMO also discussed about port traffic: "In the first 8 month of the current Iranian calendar year which began on March 21, 20,928 vessels moored at the ports of Hormozgan. 3,405 of the vessels weighed over 1 ton (14% growth) and 17,523 of them weighed under 1 ton (6% growth)."
Idani said the vessel traffic at ports of Hormozgan has increased. "In the 8 month period, 8% growth in vessel traffic in comparison to the same period of time last year, was apparent," He said.