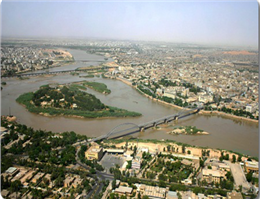 "Due to the autumn rainfall and the pleasant weather of Ahvaz, thousands of tourist from all over the province, come to Ahvaz to visit the pleasing eyesight of the park," Seyed Khalaf Mousavi, mayor of Ahvaz, told Mana correspondent.
"For the convenience of tourists, the park has been equipped with facilities such as parking lot, drinking water, and an Amusement Park," he said.
The mayor of Ahvaz also added: "Most of the tourists who visit the park, also try river fishing at Karoon River. Some of the tourist are much more interested in shooting family photos along the riverside of the park."
Mousavi said: "The 10 hectare island has become one of the most popular tourist destinations in Khuzestan province, which needs to be invested in for more tourist attraction."
The island is accessible through a 250 meter bridge.
In autumn, as the river discharge increases, the island boasts a beautiful scenery.
0
Visit Home
Send to friends
Print
Newsletter
Share this news