42 million tons of goods were loaded and unloaded in the Shahid Rajaee Port in the first 8 month of the current year. 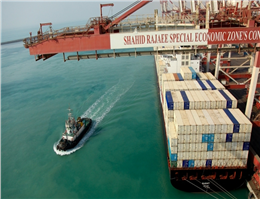