Over 2600 Ships to Moor in Shahid Rajaei Port

The Director of Hormozgan Province's Ports and Maritime Organization announced that 42 million tons of different goods have been embarked or disembarked in Shahid Rajaei Port since March 2015, and added that transit and exporting petroleum goods have experienced 69 % and 25 % of rise, respectively. 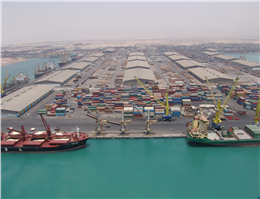 According to MANA, Ebrahim Idani offered a report on the operation of Shahid Rajaei Port since March 2015, and remarked that a total of 42,490,058 tons of petroleum and non-petroleum goods have been embarked and disembarked in Iran's largest trade port in this period. He added that 26,331,748 tons of this cargo was non-petroleum goods whereas petroleum goods made 16,158,840 tons of it.
He asserted that 4,159,673 tons of petroleum products have been exported from Shahid Rajaei Port since March 2015, and this highlights a 25-percent increase compared to the same period last year.

The Transit of Approximately 650,000 Tons of Petroleum Products
The Director of Hormozgan Province's Ports and Maritime Organization announced that in the mentioned period, 648,000 tones of petroleum products have been exported to different countries from Shahid Rajaei Port, which indicates a 96-percent increase compared to the previous year.
Idani speculated that in the forthcoming 4 months, 1,608,113 tons of various petroleum products will be imported to the country through Khalij-E-Fars Ports (the petroleum section of Shahid Rajaei Port). He also predicted that this cabotage reaches 9,737,864 tons in the next year.

Over 2600 Ships to Moor
The director of Shahid Rajaei Port's Special Economic Zone announced that 2663 vessels have moored in this port, and this figure depicts a two-percent hike compared to the last year. He added that since March 2015, 2050 vessels of 1000 tons and higher as well as 613 vessels of below 1000 tons have moored in and left this port.
Finally, Idani stated that in the mentioned period, 1,091,397 TE containers have been embarked and disembarked in Shahid Rajaei Port, as the most advanced container port in the country.
Enjoying 40 dock posts that have been stretched over 2400 hectares, Shahid Rajaei Port is the largest trade port in Iran, and it enjoys the transit capacity of approximately 90 million tones of petroleum and non-petroleum products. This port is located 23 kilometers to the west of Bandarabbas, Hormozgan Province.
0
Visit Home
Send to friends
Print
Newsletter
Share this news