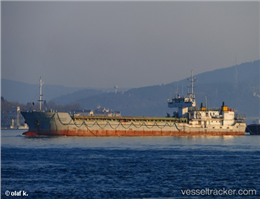 Its owners, a Ukrainian state company, assumed it would never sail again. When a Turkish company offered to buy it for $300,000, they watched as the hulk was towed away, presumably for scrap.
Nine months later the ship is back at sea, renamed Kazan-60, reflagged as part of Russia's naval auxiliary fleet, and repurposed as an unlikely part of Moscow's biggest military operation outside the old Soviet boundaries since the Cold War.
"It had not been used as a vessel for many years," said Dmitri Barinov, board chairman of Ukraine's Danube Shipping Company, surprised that the ship, which his company sold to Turkish firm 2 E Denizcilik, was sailing again.
According to shipping industry sources, publicly available data and photos collected by bloggers, Moscow has acquired at least four nearly obsolete cargo vessels from Turkish firms since around late September when it began air strikes in Syria.

The ships have been given new Russian names and enlisted in Moscow's naval auxiliary, a logistics fleet which Russia, like other maritime powers, maintains separate from its regular navy.
A second shipping source, from Turkey, said: "Russian companies approached the market in September and bought six to seven ships in total."
0
Tags: Russian Navy
Visit Home
Send to friends
Print
Newsletter
Share this news