<![endif]--> Water Tourism will be promoted at Karoon River

Water Tourism will be promoted at Karoon River

According to the Director General of the Civil Organization of Karoon Coast, Water Tourism will be promoted at Karoon River by opening Coast Tourism Projects at the coast of this river. 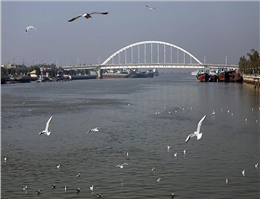 Interviewing with MANA news agency, the Director General of the Civil Organization of Karoon Coast further stated: “Constructing Golestan Coast Complex in city of Ahvaz is one of the significant civil projects in province of Khouzestan.”
Mehdi Madari further asserted: “This project is under construction by the Civil Organization of Karoon Coast under the supervision of the Governor Generalship of Khouzestan as the contractor.”
Asserting that the amount of fund needed for this project is 100 billion Iranian Rials, he clarified: “In the first phase of this project, a fund of 24 billion Rials was allocated to it and the remaining amount of costs was allocated to this project from the Governor Generalship of Khouzestan since the last year.”
He added that the construction project of Golestan Touristy, Recreational and Sports Beach Complex is in its final stages, and it is prognosticated that the complex would be ready for public use in the next few months, before the new year.
According to Madari, the structure of this touristy beach complex has been constructed to reinforced concrete with a wooden roof.
He also stated that the embankment of the seaside for the construction of a park, and the dredging of the river has been carried out in the beach area of Golestan by Omran-E-Sahel-E-Karoon Organization.
He also added that Golestan Touristy Beach Complex includes a restaurant, a coffee shop and a sailing dock for water sports such as jet skiing.
The CEO of Omran-E-Sahel-E-Karoon Organization mentioned Koot Abdollah Beach Complex project as yet another significant water tourism projects in Karoon River, and stated that the construction of Koot Abdollah Beach Complex in the city of Ahvaz is another paramount provincial construction projects, which is being carried out by Omran-E-Sahel-E-Karoon Organization.
He additionally remarked that the speculated budget for the construction of this complex reaches 100 billion Rials, just as that of Golestan Beach Complex.
The CEO of Omran-E-Sahel-E-Karoon Organization asserted that this project commenced last year with the initial credit of 24 billion Rials, and it is currently passing through its final stages of construction.
According to Madari, Koot Abdollah Touristy Beach Complex is being constructed in the eastern bank of Karoon River, and it includes a sailing dock, a restaurant and a coffee shop.
He pointed out that once the construction of these touristy beach projects in the banks of Karoon River is completed, they will be handed to Khoozestan Province’s Governor Office, which is meant to determine the details of how private sector investors would operate them.
The CEO of Omran-E-Sahel-E-Karoon Organization stated that the inauguration of touristy beach projects in the banks of Karoon River up to the end of the year would bring about a total transformation in water tourism on this river.
He asserted that we would be witnessing a gradual increase in the number of tourists in the banks of Karoon River, and as well, we would witness that the satisfaction of tourists with these touristy complexes would be earned.
0
Visit Home
Send to friends
Print
Newsletter
Share this news