Several investment projects have been contracted with private sector for building silos, warehouses and tanks for edible oil, said General Manager of Ports and Maritime Organization (PMO) of Guilan. The credit dedicated to these projects worth 70 billion Toman (≃$20m), he added. 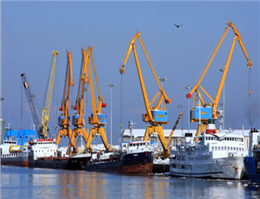 According to MANA, General Manager of Ports and Maritime Organization of Guilan, Seyed Ali Naeimi, stated that the volume of the fuel transited from Anzali port, north of Iran, has raised significantly. He said: "According to the latest statistics, since the beginning of this year the volume of the fuel transited from Anzali port is five-folded compared to the same time period last year," he added.
"A large volume of this fuel is transited to our neighbor countries, especially Turkey and Iraq," he said.
"Due to the need of Iran to cereals, transit of cereals from Anzali port to the southern parts of country has increased. We expect that the growth of cereals transit will continue."
"The growth of transit from Anzali port causes the growth of the private sector investments in this port city," he emphasized.
"Private sector investors are very interested to invest in Ports of Guilan, particularly Anzali port. A lot of investors have been visiting the PMO of Guilan to contract investment projects." He added: "After they submit their investment plans to the PMO of Guilan, our experts will study the plans. If the investment plan suits, it will be approved for Implementation."
"Up to now, the project for constructing a 45000 ton silo in Anzali was approved and contracted. After exploiting this cereal silo, the capacity for loading and unloading cereals will raise significantly. We expect that this silo will be exploited in the next two years." He added: "The more cereal silos we have, the more acceleration in import and export of cereals we can expect."
"The investment project for constructing 10000 ton tanks for edible oil is also contracted," General Manager of PMO of Guilan also stated.
He also said that 5 specialized warehouses are going to be constructed by the private sector. "The contract for building specialized warehouses is finalized and registered," he added.
He said: "The 8 contracted projects worth more than 70 billion Toman."
"We hope that the surge in investment by the private sector on the development of trade and marine shipping infrastructures will be followed by the development of infrastructure of multimodal transportation in ports of Iran, particularly ports at northern Iran," Naeimi emphasized.
"Port of Anzali is endeavoring very hard, thus we hope this port will soon find its right place among other ports at northern Iran and become the number one port for importing and exporting goods," General Manager of PMO of Guilan stated.
0
Tags: Anzali port
Visit Home
Send to friends
Print
Newsletter
Share this news