Saeidi: Suggests that relationships with China and Chinese banks will allow IRISL to place favourable orders at Chinese yards. 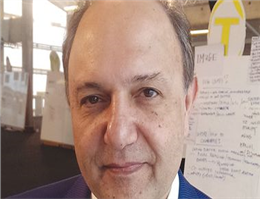 Newbuildings to be financed through funds said to exceed $120bn frozen internationally due to sanctions
IRAN’S widely anticipated post-sanctions return to international shipping in 2016 will come with a fleet expansion shopping list consisting of 579,000 teu of containerships, 2m dwt of dry bulk vessels and 1.6m dwt of tankers, all to be operational by 2020 according to the recently appointed head of Islamic Republic of Iran Shipping Lines.
The bold statement of intent to modernise and expand the national fleet primarily through newbuildings will be financed through funds purported to exceed $120bn, currently frozen internationally due to sanctions.
IRISL is also discussing the possibility of alliances as part of the planned expansion strategy and is already pursuing talks with the Shipping Corporation of India regarding the revival of their Irano-Hind joint venture that was wound up in 2013, after 38 years in operation, due to sanctions restrictions on trade.
Details of the audacious state policy are being gradually pushed out to the industry via IRISL’s new chairman and managing director Mohammad Saeidi, the former deputy head of Iran’s Atomic Energy Organisation, who took over IRISL in August with no prior shipping industry experience.
Dr Saeidi replaced Mohammad Hossein Dajmar, who had been named in the European Union and US list of companies and executives subject to sanctions restrictions.
Speaking to Lloyd’s List in Copenhagen, Dr Saeidi said the Iranian government is now confident that all restrictions will be lifted by January 2016, when Iran will prioritise “an immediate and significant return to shipping”.
While the international shipping operations of Iran’s two largest shipping companies — National Iranian Tanker Co and IRISL — have both been significantly curtailed under EU and US sanctions, Iran’s return to the international shipping market has been made possible under a deal reached this year between Iran and the P5+1 group, comprising the five permanent members of the UN Security Council — the US, France, the UK, China and Russia — plus Germany.
Dr Saeidi’s more detailed vision of Iran’s return to international shipping via a massive fleet modernisation programme builds on a series of often confusing statements issued to the press that simply voiced IRISL’s ambition to “be in the top 10 within five years”.
Major newbuilding contracts
According to Dr Saeidi’s plan, a series of major newbuilding contracts will be signed in a matter of weeks as Iran taps significant funds built up in China, South Korea, Japan and India through trading during sanctions. While much of Iran’s trade was not halted, payments for oil became difficult due to international banking restrictions, so Iran has built up over $120bn in funds internationally that it fully expects to be unfrozen once sanctions are lifted.
Iran will now use these funds to place newbuilding orders, predominantly in China, where Dr Saeidi suggests that existing relationships with China and Chinese banks will allow IRISL to place favourable orders at Chinese yards. South Korean yards are also under consideration as are some secondhand purchases, but the initial focus will be newbuildings in China.
Dr Saeidi will not be drawn on tonnage specifics yet, and has been variously quoted as stating that the company will be ordering panamax vessels, 14,000 teu and even 18,000 teu tonnage to take on the top players. Speaking to Lloyd’s List he suggests that 10,000 teu was more likely to be the target, but he also suggests that final decisions will be made in the coming weeks.
In terms of his priorities, a return to container shipping tops his agenda and he is actively considering the possibilities of alliances and joint ventures to break back into international trades. While he accepts that difficult market conditions will present some immediate issues even with a complete lifting of sanctions restrictions, he remains confident that IRISL can make a dent in the market with the right mix of efficient new tonnage and trade ties with the loose association of the Commonwealth of Independent States in central Asia.
Increasing IRISL’s dry bulk fleet will take a lower priority for Dr Saeidi, at least initially. However, with a targeted increase from 2.5m dwt to 4.5m dwt by 2020 he concedes he has set the company an ambitious schedule.
Responding to questions regarding his lack of shipping experience, Dr Saeidi points out that his economic background as head of the country’s largest pension fund and private investor gives him a solid foundation in understanding international markets. He also points out that his advisers back in Tehran are some of the best in the business.
While both IRISL and NITC had gained international reputations as well-managed companies prior to international sanctions, a series of changes in the management appointed by the state have raised questions of competence within the international shipping community.
Iran replaced the veteran head of the National Iranian Tanker Co, Mohammad Souri, with Hamid Behbahani, a former minister, in 2012 when international pressure first started building on Iran's customers to reduce purchases of Iranian oil.