Construction work on a controversial canal that would link the Pacific Ocean with the Caribbean via an overland route across Nicaragua and through Central America’s largest lake has been postponed until late 2016, says the company behind the project. 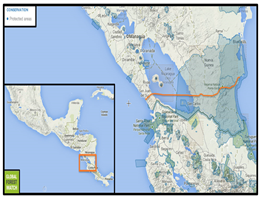 According to MANA, China-based HKND Co. issued a statement Wednesday saying that “the construction of locks and the big excavations will start toward the end of 2016,” adding that “the canal’s design is currently being fine-tuned.”
Earlier this month, the Nicaraguan government issued an environmental permit for the project, which has an estimated cost of $50 billion dollars. HKND started building access roads for the project nearly a year ago, but has yet to break ground on the waterway.
The project has drawn sharp criticism from scientists over its potential impacts on Lake Nicaragua and delicate coastal ecosystems. Local communities concerned about their farmland have also protested the project, while some policy experts have raised doubts about its financial viability. China’s economic downturn and the worldwide collapse in commodity prices, have further undercut enthusiasm for the project.
0
Visit Home
Send to friends
Print
Newsletter
Share this news