MALAYSIA-listed MMC Corporation’s ports and logistics segment reported a 35.7% increase in profit before tax for the nine months ended September 30, 2015 to RM262.3m ($62m) from a RM193.3m profit before tax in the same period last year. 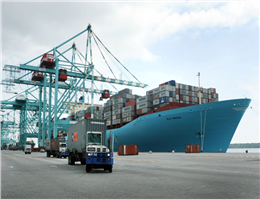 According to MANA,The profit increase was attributed to a rise in container throughput handled at Port of Tanjung Pelapas as a result of the 2M alliance between Maersk Line and Mediterranean Shipping Company in January 2015, along with reduced operating costs due to the group’s ongoing cost efficiency and productivity initiatives.
Revenue for the first nine months of 2015 increased by 10.5% to RM1.3bn compared with the year-ago period’s RM1.2bn.
The group said its ports and logistics division will see revenue growth ahead as volumes continue to increase at Port of Tanjung Pelapas and Johor Port and from additional contributions from NCB Holdings, which it is in the process of acquiring.
MMC Corporation has received approval from its shareholders to purchase around 251.2m shares, or a 53.4% stake, in NCB for $1.1bn, or RM4.40 per share, from Permodalan Nasional and AmanahRaya Trustees.
When the transaction is completed, MMC Corporation, through its unit MMC Port, will see its NCB stake rise to 83.5% from 30.1%.
MMC Port will then be obligated to make a mandatory general offer for the remaining 77.4m shares it does not already own, or a 16.4% stake in NCB, for an offer price of RM4.40 per share.
That adds up to a total consideration of RM340.5m.
NCB Holdings is the parent company of Northport Malaysia, which runs the container terminals at Port Klang. Northport handles a range of cargoes including containers, cars and break bulk as well as liquid and dry bulk cargoes.
“NCB Holdings will expand MMC's presence in the port business from south to west of Peninsular Malaysia,” the group said in a statement.
“In addition, MMC aims to achieve operational and cost synergies which will further enhance the financial performance of its ports and logistics business division.”
0
Visit Home
Send to friends
Print
Newsletter
Share this news