Kitack Lim, former president of Busan Port Authority, has been named as secretary general of the International Maritime Organization (IMO), with effect from 1 January 2016. 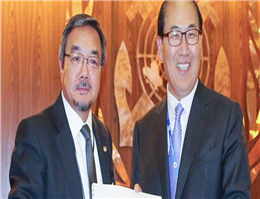 According to MANA, Lim, who will initially serve as secretary-general for four years, has long supported the IMO and attended his first meetings as part of the delegation from the Republic of Korea in 1986. From 1992, he engaged in activities to promote maritime safety through effective implementation of IMO conventions in his country and other IMO Member States in the Asian region. In addition, Lim served as the Republic of Korea’s Deputy Permanent Representative to the IMO from 2006 to 2009 and was chairman of the Sub-Committee on Flag State Implementation from 2002 to 2004.
“IMO currently faces an array of challenges and issues such as implementation of Member State Audit Scheme, emissions from ships, application of goal-based standards, increasing traffic in polar waters, introduction of e-navigation, the Ballast Water Management Convention, counter-piracy activities, cyber security and safety standards for passenger ships and fishing vessels,” said Lim. “However, with the collective wisdom and insight of all member states and stakeholders, I am confident that we can withstand the storm and resolve such difficult issues. I hope we can come together as one to pave a new future for IMO, based on the noble efforts and achievements to date.” To symbolise Lim’s acquisition of the role, outgoing secretary general Koji Sekimizu handed over a comprehensive briefing paper on the IMO’s recent achievements and ongoing objectives, the Secretariat’s structure and support work, the organization’s financial arrangements and other relevant topics.
0
Visit Home
Send to friends
Print
Newsletter
Share this news