Managing director of the Iran-India Shipping Corporation, said: "Once the sanctions are lifted, most of the ties among Iran and India will be expanded in trade and sea transport, therefore a significant increase in exports is expected." 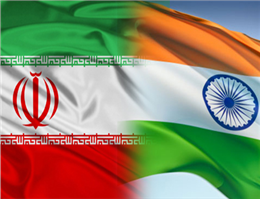 Tehran and New Delhi have agreed to boost sea transport, said Jamshid Khalili on his visit to New Delhi on Saturday, MANA reported.
He said: "Iran and India are going to expand maritime cooperation, following the removal of sanctions against the Islamic Republic."
Managing director of the Iran-India Shipping Corporation said that in his last visit to New Delhi most of difficulties of the Iran-India Shipping Corporation were resolved. He stated: "Currently the licenses issued to the Iranian vessels are valid only for one year, but the Indian officials have promised to issue permanent shipping licenses for Iranian ships to solve the insurance problems faced by the Iranian vessels."
He mentioned that some of the Iranian vessels face some issues on Indian waters: "Following this agreement, the Indian side will resolve the issues faced by Iranian vessels on Indian waters."
He said that sea transport is one of the least expensive ways to transport goods. "Following this agreement, trade and sea transport will increase significantly between Iran and India."
Khalili said: "Iran and India enjoy satisfactory maritime facilities; therefore, by the expansion of relations between Tehran and New Delhi, the infrastructure for better trade and commerce will be made."
He added: "Currently, both in Iran and India, a large amount of goods are exported in containers or as bulk via vessels. Sea transport is remarkably valued by both countries."
Managing director of the Iran-India Shipping Corporation said that joint comprehensive plan of action and the removal of sanctions, will expand trade and sea transport between Tehran and New Delhi. "Once the sanctions are lifted, most of the ties among Iran and India will be expanded in trade and sea transport, therefore a significant increase in exports is expected."
In recent years, Tehran and New Delhi have done a lot to accelerate the completion of joint transit and transport projects in the port city of Chabahar, southern Iran.