The cooperation with giant shipping lines in the realms of shipping, training, port operation and fleet development were elaborated in labor and social affair’s Economic potentials forum with the attendance of Iranian ambassadors in countries all over the world held in IRISL tower. 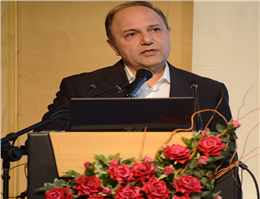 According to MANA, IRISL managing director and chairman of IRISL board of directors in ministry of labor and social affair’s economic potentials forum informed of the fleet development plans along with rebranding IRISL in international scene and demanded Iran’s ambassadors’ support in different countries.
Dr. Mohammad Saeidi pointed out that: Unfortunately, today IRISL stands at 23th among top Shipping Lines thanks to sanctions and lost its place in the shipping world; however, one of our main goals is to stand at where we used to.
He explained IRISL activities and continued: IRISL manages container, bulk and general cargo shipping, bunkering, overseas offices, ferries and freighters in Persian Gulf and Gulf of Oman, along with shipping in Caspian Sea, manning, maritime training, port operations and multi-modal transportation etc.
Dr. Saeidi briefed that IRISL operates 160 vessels with variety of capacity and classes with total capacity of 5.240.000 DWT and 118, 693 TEU. He also informed of capacity of 1921 seats in IRISL ferries.
He added that: operating 22 container ships in Iranian south ports, IRISL handles 60 pct of import and export in this region while eyeing to increase the capacity and claim bigger share of shipping in the area.
Chairman of IRISL board of directors and managing director and pointed out: the main focus in IRISL is on container shipping while 26 and 5 pct of IRISL fleet are allocated to bulk shipping and other services. Furthermore, he elaborated that IRISL operates 63 ships in the realm of bulk and general cargo shipping including 26 bulkers, four cargo carriers, 15 multi-purpose vessels and eight tankers.
Dr. Saeidi highlighted the importance of CIS strategic region and indicated: we operate 24 ships in this region and increasing the related fleet is within our future plans so as to play important role in CIS market as well as Caspian Sea and provide the region with optimized multi-modal transportation.
Moreover, Chairman of IRISL board of directors mentioned the capabilities of transferring passengers and identified: our ferries sail in Bandar Abbas-Sharjah/Dubai/Kuwait and Basra and our aim is to provide the passengers with high speed ferries in these routes.
He commented that JCPOA is a turning point for IRISL and after implementation day, starting from January, it steps in new international market which results in revenue increase and establishing new business in international scene.
He laid emphasis on fleet expansion of tanker ships and stated that: considering the fact that chemical products from Iranian refineries meet standards to be exported to Europe, we aim to work on the realm of product ships and transfer the chemical products right from the supplier to end users. He regretted that brokers exert extra added value on chemical product industry and hoped the problem will be solved through planning and organizing the issue.
He reminded that IRISL operates in two routes from Bandar Abbas to Jebel Ali and Shanghai, Qingdao, Tianjin and Dalian in China while the other one is Bandar Abbas, Jebel Ali, Colombo, Sri lanka, India, Pakistan, Singapore and China. There will be two additional routes including Bandar Abbas, Imam Port, Asaluye and Jebel Ali to Malta, Geneva (Italy), Valencia (Spain) and Marseille (France). There will be a route in Antwerp (Belgium) to provide service starting from next month. The two additional routes enable us to cover shipping activities in whole Europe, he said.
Moreover, he claimed that reactivating the route, Dalian (China), Qingdao, Tianjin, Shanghai and Ningbo is within our plans. The project builds a straight line from Singapore to Europe which gives the opportunity to Iran to handle export and import not only in Iran but other international markets.
Shipping in the route, Bandar Abbas, Indian Ocean, Cape Town (South Africa) and South America is a lucrative business for IRISL” said Dr. Saeidi and indicated that: we aim to establish a shared company in Brazil and consequently revive International affair in IRISL.
He also remarked Vancouver as one of the other lucrative shipping destinations after Iran reestablishes political relations with Canada and identified East Asia (China) to South America, Europe to South America along with South and Central America to South Asia and finally to Antwerp (Belgium) as the other potentially lucrative routes for IRISL.
He added that: CIS is one of the main points for IRISL. Taking advantage of IRISL multi-modal transportation and Inche Borun railroad to Turkmenistan and Kazakhstan, IRISL is able to transport CIS cargo from the beginning to the required destination by railroad and IRISL vessels.
Finally yet importantly, he expected foreign affair ministry to pave the way for IRISL vessels to anchor in different ports all over the world and highlighted the role of Iranian ambassadors in the relative country. He furthermore announced that IRISL is ready to lease or invest in some ports.
According to MANA reporter, labor and social affair’s economic potentials forum was held with the attendance of Dr, Rabiei, the minister of labor and social affair ministry, Social Security Organization’s managing director, managing director of the Civil Servants Pension Organization, Government Trading Corporation of Iran’ managing director along with over 100 Iranian ambassadors in variety of countries all over the world in IRISL tower.
0
Tags: کشتیرانی حمل و نقل دریایی
Visit Home
Send to friends
Print
Newsletter
Share this news