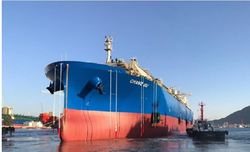 The 98,000 cu m Seri Everest is all set to make its maiden voyage from the newly constructed Orbit ethane export terminal in Nederland, Texas. This is the first of six vessels to work for Zhejiang Satellite Petrochemical under a 15-year sale-and leaseback deal with MISC.

According to Lloyd's List Intelligence vessel movement data, the vessel called at the Orbit terminal in Nederland on December 30 to take on its maiden cargo.

The vessel has been renamed Seri Everest and is now owned and managed by MISC and will make her maiden delivery of US ethane to China.

The 60,000 dwt very large ethane carrier on charter to China's Zhejiang Satellite Petrochemical arrived at the Orbit terminal on December 30 to take on its maiden cargo, according to Lloyd's List Intelligence vessel movement data.

The vessel is scheduled to load 955,800 barrels of ethane and the operation will be the largest transportation of ethane on an industrial scale to date. The cargo is expected to head to Zhejiang Satellite Petrochemical’s upcoming ethylene steam cracker in Lianyungang on China's east coast.

Seri Everest is the first of six VLECs to be delivered to MISC from 2020 to 2021 and chartered back to Zhejiang Satellite Petrochemical, earmarked to feed its cracker with US ethane.

US-based Energy Transfer owns the Orbit terminal in partnership with the US subsidiary of Zhejiang Satellite Petrochemical.

The deal will see as much as 150,000 bpd of ethane heading for two ethane steam crackers in China.

The Orbit terminal adds at least 75,000 bpd to export volumes this year, rising to 150,000 bpd in 2022. It will also catapult China to become the largest buyer of US ethane. At present, China is behind India, the UK, and Norway.

Meanwhile, Lianyungang is expected to consume up to 75,000 barrels per day of ethane, equivalent to three VLEC loadings a month. The Chinese petrochemical company is scheduled to lift up to 150,000 barrels a day of ethane from Nederland under a long-term, demand-based agreement.