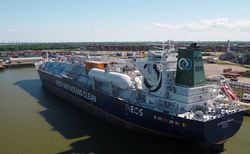 Evergas-operated very large ethane carrier newbuilding has become the first vessel of this size to ship a cargo to Europe and is now engaged in a four-stage ship-to-ship operation.

The very large ethane carrier was built to meet a long-term supply agreement between Ineos and SP Chemicals to ship ethane to China from the US, but cracker delays have created an opportunity for larger ethane shipments to Europe.

TWO gas carriers are completing the world’s first ship-to-ship transfers of ethane at the Scapa Flow anchorage off Scotland for petrochemical company Ineos.

The newly delivered JS Ineos Marlin, a 81,556 cu m very large ethane carrier, has transferred part of its cargo to the smaller, 27,500 cu m JS Ineos Innovation in two separate ship-to-ship transfers that took place on May 28 and June 6, according to data analytics provider Kpler. A further two are expected to take place there over the next 10 days, based on the size of the larger vessel’s tanks.

This is also the first laden voyage for the JS Ineos Marlin, which loaded its cargo of ethane from the Enterprise Product Partners terminal at Morgan’s Point, Texas, about a month ago, and arrived at Scarpa Flow anchorage on May 27, vessel-tracking data shows. This vessel’s third party operator is listed as Evergas, according to Lloyd’s List Intelligence data and it was built at China’s Dalian Shipbuilding. Evergas lists a fleet of five semi-refrigerated ethylene carriers on its website.

JS Ineos Innovation sailed to Rafnes, Norway, where Ineos has a gas cracker, to discharge both cargoes. It is anticipated that the liquefied petroleum gas carrier, which departed Rafnes over the weekend, is again sailing to the JS Ineos Marlin to undertake the third of four ship-to-ship transfers.

JS Ineos Marlin was built to meet a long-term supply agreement between Ineos and SP Chemicals to ship ethane to China from the US, for the first time. Under the agreement, Ineos would ship undisclosed volumes of ethane to SP Chemical’s new gas cracker facility under construction in Taixing on the world’s largest very large ethane carrier, a November 2017 joint announcement said.

Construction delays meant the gas cracker is not expected to be operational until later this year, a London-based trader told Lloyd’s List. This meant Ineos is deploying the tanker on alternative trades. The trader was uncertain whether ethane is included on the list of US products to which China will apply 25% tariffs.

Unlike other LPG carriers used by Ineos, the new LPG carrier is unable to discharge at Ineos’ nearby Grangemouth cracking facilities at Scotland. The trader said JS Ineos Marlin is unable to navigate the lock system for which the other vessels were designed.