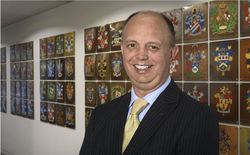 UK Chamber of Shipping president implores British MPs to put the future of the country ahead of political manoeuvring and egos.

THE UK government must put an end to petty differences and in-fighting over Brexit and focus on getting the best deal for British businesses, according to UK Chamber of Shipping president Sir Michael Bibby.

Speaking at the chamber's annual dinner in London, Sir Michael told guests including Secretary of State for Transport Chris Grayling and Shipping Minister Nusrat Ghani that time was running out to agree a sensible deal with the Europe Union.

“We ask MPs to forget their red lines, any political egos and petty differences and come together to find a solution that works,” he said. “Our future depends on your common sense, let history judge the wisdom of our great parliamentary democracy not its tragic demise.”

Sir Michael also used his speech to call for a broadening out of UK tonnage tax to include a wider variety of shipowners, operators and managers and lengthening the application windows to ensure every company has a chance to join.

Tonnage tax is a form of corporation tax that uses a fixed notional profit based on the net tonnage of owned ships instead of profits from shipping activities.

Companies can at present elect to sign up to UK tonnage tax for a minimum of 10 years and may extend that election on a rolling annual basis.

Businesses must renew their position within the initial 10-year period or risk being struck off.

The UK Chamber wants to develop the whole UK maritime cluster to entice more shipowners and to strengthen its voice in public debate, Sir Michael said.

He urged the government to make the process of moving ships to the UK less bureaucratic, with easy-to-use online services that support maritime businesses.

“The easier it is to invest, the more investment will be made,” he said. “I believe we have a fleeting window of opportunity to act in unison and reverse the worrying developments we have seen recently, on both the UK flag and the tonnage tax scheme. A fundamental policy shift is needed to make the UK indisputably the best place in the world for maritime business.”

The UK Treasury is reported to be considering making amendments to the tonnage tax should the country crash out of the EU with no deal.

A number of vessel operators have recently reflagged out of the UK, including ferry operator P&O.

A number of other prominent UK flag users, including Stena and Stolt Nielsen, are also considering reflagging, according to media reports.

Nautilus, the officers’ union,  has expressed concern that Maersk could ditch the Red Ensign altogether, while Maersk says that it is cutting its intake of British cadets but will honour its tonnage tax obligations.

Sir Michael is a non-executive director of the Bibby Line Group, best known for its shipping line, but which also owns Bibby Financial Services and warehouse and transport firm Bibby Distribution, alongside the Costcutter Supermarkets Group.