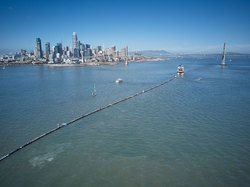 System 001 is being towed from the San Francisco Bay by the vessel Maersk Launcher, provided to the project by Danish Maersk Group and DeepGreen, its current charter holder.

The system consists of a 600-meter-long U-shaped floating barrier with a three-meter skirt attached below. The system is designed to be propelled by wind and waves, allowing it to passively catch and concentrate plastic debris in front of it. Due to its shape, the debris will be funnelled to the center of the system. Moving slightly faster than the plastic, the system will act like a giant Pac-Man, skimming the surface of the ocean.

The Ocean Cleanup's first cleanup system, System 001, is now on route into the Pacific Ocean. Follow our progress over the next months as we head to the middle of the Great Pacific Garbage Patch.

The system will be deployed in the Great Pacific Garbage Patch, the world’s largest accumulation zone of ocean plastics. Situated halfway between Hawaii and California, the patch contains 1.8 trillion pieces of plastic, and covers an area twice the size of Texas.

The Ocean Cleanup said that it the first plastic could be collected and returned to land within 6 months after deployment. This will mark the first time that free floating plastic will have been successfully collected at sea. After returning the plastic to land, The Ocean Cleanup plans to recycle the material into products and use the proceeds to help fund the cleanup operations.