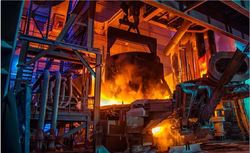 In July, China’s production amounted to 81.2m tonnes, a record high and 7.2% higher on year.

Arctic Securities said in a note: “The increase in production comes on the back of high margins, policy makers’ promise to boost infrastructure investment, as well as the increased use of imported, high-grade iron ore.

The strong increase was partly driven by a recovery in shipments from Brazil, where much of the high quality grade was produced, driving up demand for capesize bulkers in longhaul trade.

Capesize average spot earnings have outperformed other sizes of bulkers on the Baltic Exchange, hovering above $25,000 per day this month.

In efforts to curb pollution, China has been closing iron ore mines domestically, a development that will likely to lead to a continued high level of imports.

Before adjusting for quality differences of Chinese production, China’s iron ore output fell 38% on year to 391m tonnes in the first half of 2018, according to Clarksons Platou.

“Total Chinese iron ore inventories has been drawn down this year, which bodes well for the seasonal upswing on capesize rates in the second half of 2018,” the brokerage said in a note.