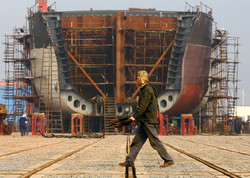 Japanese shipbuilders received export orders for a total 536,000 gross tons or 18 vessels in June, down 46.9% year on year but up 7.1% from May, Japan Ship Exporters’ Association data showed.

A JSEA official said vessel prices offered by neighboring countries were lower and Japanese shipbuilders were facing difficulties securing orders.
“Also vessel owners are considering how they respond to new regulations by the International Maritime Organization requiring the use of lower sulfur fuel from January 2020, such as if they should add the machinery to their existing vessels, order new vessels or pay higher prices for lower sulfur fuel,” he said.
The JSEA official said backlog orders held by Japanese shipbuilders have been decreasing as new orders stagnate.
“Shipbuilders will have to keep their operating ratio lower to have stable production for a while; their steel consumption will not rise any time soon,” he said.
Japanese shipbuilders had a total 25.41 million gross tons of backlog orders at end June, down 4.9% from end May, according to the data.
Japan’s Ministry of Economy, Trade and Industry forecast ordinary carbon steel consumption by Japanese shipbuilders to edge down 0.3% year on year over July-September to 1.04 million mt, up 1.7% from April-June.
0
Tags: japan shipbuilding order 2018
Visit Home
Send to friends
Print
Newsletter
Share this news