The year 2017, when the majority of the world nations experienced political stability, witnessed significant events in the field of trade. A growth in the international maritime trade could be interpreted as a signal that the market is peaking again. The world was faced with some sort of instability in 2016 in the light of Brexit, triple elections in Europe and US presidential elections, which resulted in cautious behaviors and decision. 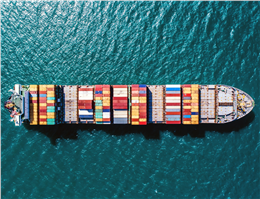 . Admittedly, shipping industry was not an exception to this. Nonetheless, a brisk glance at the global economic trends in 2017 highlights that a new equilibrium is coming to existence under the influence of latent demand detection technologies, a reduction in supply at the international fleet level, and consolidation of some shipping lines. In fact, these matters have retrieved the opportunity of becoming profitable again for an industry which is practically in its mature years age-wise.
While from 2005 to 2010, the market witnessed a 5.5-percent growth; this figure, however, underwent a nose-dive fall to approximately 3.1 % between 2010 and 2015. Between 2015 and 2018, the tide began to come up, and the demand has been proportionally rising compared to 2010-2015, but this cannot be deemed a rise compared to 2005-2010. When being asked about the reasons of an increase in demands between 2015 to 2017 experts assert that shipping lines are moving forward in their supply trends at a slow pace. The 5-year recession in the field has practically disrupted the fleet supply, causing the lines to merge, and reduce their orders for purchasing vessels. In addition, the 2008 economic recession reached a manageable point. European countries such as Greece, Portugal, Spain and Iceland, who had almost reached the boundaries of bankruptcy managed to rebuild their economies. Even the European Union injected an extra 5 billion Euros to the market for managing its negative inflation, keeping this rate between 0 to 2 percent. On the other hand, the impacts of the US sanctions gradually faded away. Indeed, the condition of consumption was mended in comparison with 2008 to 2010, when the crisis broke out. However, the mending trend has been delicate. There was a recession between 2005 and 2010; the ship owners had ordered a large number of ships, and the prices hence had become increasingly competitive. A rise in the number of vessels as well as new technologies had given rise to an increase in the investment. Given that the new vessels were not able to venture to just any port, they needed to make turns and dock at alternative ports.
Therefore various factors shadowed the international maritime transportation and caused a drop in the indices. Yet, now, this economy is gradually peaking. Nevertheless, it is difficult to speculate the conditions after 2018 because events that had created the economic crisis could have been solved by financial regulation. The ex-president of the US, Barrack Obama, had commenced taking measures for such regulations, but Donald Trump, from his early days in the office, terminated the financial regulations supervising financial derivatives. This termination makes it difficult to make long-term prognostication, but what could be foreseen for certain is that the market will have a slow rise up to the end of 2018.It is noteworthy that the type of possession as well as the registration of the ships are two critical issues. Japan and Greece hold the first and second positions in this regard, and China, Germany, the United States and South Korea stand in the next ranks. The access of these countries to well equipped fleet and container ships could be translated as the actual demand and supply in their own economic capacities. Each of these countries are key players in the global economic games, production, and export and import of raw materials. The year 2017 is the year of economic stability for Japan,China, Germany, the United States and South Korea, who have all moved on from the economic problems of the previous years.
Collaborations of Transportation Companies in 2017
The year 2017 witnessed an increase in technological stimuli. These stimuli have a massive impact on consumerism seeing that they discover the blind spots of demands in markets. Here, technology does not mean building equipment; it rather represents the true understanding of consumer behavior relying on information technology. In other words, more accurate and meticulous technologies analyze consumers’ behavior, and detect the untouched demands or form a coalition with their allies.A senior expert in transportation,
Majid Tehrani, counts the type of deals, types of agreement and diversifications in trade models as the affective factors in this regard, and asserted that these coalitions have been formed by companies who are concerned about their final price and geographical classifications. They also use more advanced technologies. As a case in point, DHL or Kuehne&Nagel, as logistic activists, enjoy extremely complicated technologies, and have managed to conduct the necessary restorations.
According to a member of the board at Shipping and Subsidiary
Services Association, Mehrshad Moeinm, the global demands in the shipping market in the past years drove many shipping lines to place orders to purchase ship to be able to cater to the demands they predicted would emerge; nevertheless, the worldwide recession did not allow the transportation of goods reach the predicted levels. Upon this, the companies that had miscalculated their predictions ran into problems. Meanwhile, the more powerful companies merged with each other in order to reduce their losses to a minimum. Speculating that shipping activities will be positive and promising in 2018 and 2019, Moein continued that political issues, production, social issues and many other signs are highlighting that the world has reached a point where countries prefer to have further collaborations with each other. These interactions are more vividly observed in the economic arenas. Our age is the age of interactions and dialog among countries; the age of win-win economic affairs.
Another transportation expert, Mahmoud Rostam Afshar, is of the opinion that world shipping lines are placing orders for building larger ships, and small lines are merging.Referring to the excellent moves of IRISL in international scale, Rostam Afshar added that global economy is growing out of the recession, yet the growth rate will bit be impressive. Hence, he speculated that in 2018, shipping lines will witness a maximum positive trend of 5 %.
0
Visit Home
Send to friends
Print
Newsletter
Share this news