<![endif]--> An Increase in South Pars Production The Key to Iran’s Gas Export

A growth in Iran’s share of global gas trade is one of the main objective clauses of Iran’s oil and gas industry in the 2025 horizon. In this comprehensive 20-year plan, which was launched in 2005 and we are only 8 years away from its ending point; it has been asserted that Iran must hold a 10-percent share in the global gas trade. Iran harbors world’s largest gas reservoirs – approximately 34 trillion cubic meters of gas which constitutes 18.2 % of the world’s total gas reservoirs – however, it holds only 1 % of the global gas trade. 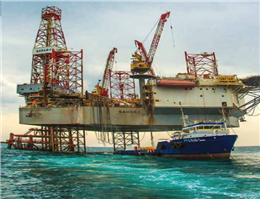 It has been speculated that the global gas trade, which constituted 1000 billion cubic meters of gas in 2015, will be expanded to 1700 billion cubic meters in 2040, and in case Iran does not launch immediate plans and take immediate actions, other rivals will capture Iran’s share of the market.
Indeed, in the growingly expanding global gas market, the first step that Iran must take to increase its share is to increase its gas production capacity. For this purpose, the Department of Oil set operationalizing half-completed phases of South Pars as its top priorities in 2013. Ever since then, the 12th, 15th, 16th, 17th, 18th, and 19th, 20th and 21st phases of South Pars have come on stream, increasing Iran’s gas extraction capacity in South Pars/North Dome common field from approximately 280 million cubic meters a day in 2013 to 575 million in 2017.This approximately 300-million-cubic-meter increase in gas extraction from South Pars/North Dome common field brought about a noticeable capacity for Iran, and enabled the country to devise and develop new gas export projects. This capacity was hence utilized to expand Iran’s share of the global gas trade.
Iran’s Share of Global Gas Trade Grows by Relying on South Pars Production Boost
The director of the International Affairs Department at National Iranian Gas Company (NIGC), Behzad Babazadeh, provided some explanation regarding the new capacities of gas extraction from South Pars/North Dome common field and its role in boosting Iran’s gas export power. He stated that South Pars Gas Complex currently supplies 75 % of Iran’s gas production, and increasing extraction capacity from this gas field should be our top priority. Relaying on fostering gas production in South Pars, Babazadeh stated, Iran has risen one step in the global gas trade, and it has managed to export gas to Georgia for the first time. To build up on this, we are considering export negotiations with farther neighboring countries. He also added that
Iran has a gas surplus of over 60 million cubic meters on a daily basis, and this is an outstanding merit for export. According to Babazadeh, Iran’s surplus gas production could elevate its position in the global gas trade, and as well, establish better security between Iran and its neighbors. It could also be a great source of cash flow for the country. In order to increase its share of the global gas trade, Babazadeh asserted, Iran must turn into the energy hub in the region. Besides, via domestic investment, gas must be turned into a product and the rate of raw gas sales must be reduced. On the other hand, Iran should export gas to the neighboring nations, to both establish security and maintain its security.
The Well-Managed Increase in South Pars Production in 4 YearsIn an interview with our correspondent, the managing director at Pars Oil and Gas Company, Mohammad Meshkinfam, regarded focusing on South Pars Gas Field expansion as a noticeable achievement of Iran’s government. He asserted that delays in extraction from any phase of South Pars would cause the loss of approximately 5 million dollars a day. Admittedly, South Pars/North Dome is a common field between Iran and Qatar, the less Iran extracts, the more the Qatari rival does. Considering this, and in order to attain the maximum national interest, the Department of Oil set completing the unfinished South Pars projects as its top priority and concentrated its maximum efforts on them.According to Meshkinfam, in the light of setting these priorities, which took place in two major parts, Iran managed to increase its production in 4 years under full control, and currently, Iran’s production rate has reached that of Qatar. Emphasizing that enhancing gas extraction from South Pars/North Dome common field is an excellent back-up for supplying domestic needs and export, Meshkinfam asserted that the more gas the Department of Energy has, the more accurately and freely it could plan new gas export projects, and expand Iran’s share in global gas trade.The development of South Pars is still in progress by completing and operationalizing the 13th, 14th
, 22nd and 24th phases, Meshkinfam added. The operationalisation of these new phases, he continued, will increase Iran’s gas extraction capacity to approximately 800 million cubic meters a day, and it will promote Iran’s total gas production to 1 billion cubic meters a day. Reassuringly, this production capacity will serve as an excellent for the stable export of gas to every customer in the upcoming years.
The Secondary Advantages of Expanding South Pars Gas Production Capacity
The managing director at Pars Special Economic Energy Zone
(PSEEZ), Mehdi Yousefi, pointed out that South Pars plays a crucial role in supplying gas in Iran, and asserted that the completion and operationalization of theprioritized South Pars phases in the past 4 years almost doubled the production capacity of these fields, increasing it from 270 million cubic meters a day to 570 million. This success, Yousefi continued, would not have happened if it had not been for the collaborative attempts and national determination in PSEEZ and the Oil Department.Announcing that Iran’s extraction rate from South Pars/North Dome common field has reached that of Qatar, Yousefi stated that having the same extraction rate as the Qatari rival had been a long-held dream for Iran, and it finally happened in the final days of President Rouhani’s first term administration. We do hope that once the new phases of South Pars are operationalized, Iran’s extraction rate exceeds that of
Qatar. Other than bring in a stable and abundant flow of cash for the country, the increased South Pars gas production could bring about invaluable economic, political and social advantages for Iran by being consumed domestically in petrochemical industries, or being allocated to expand gas exports, Yousefi remarked.
0
Visit Home
Send to friends
Print
Newsletter
Share this news