LIQUEFIED natural gas carrier transits via the Panama Canal are set to nearly double by 2020 to one ship per day as US natural gas producers drive unprecedented trade flows, according to Panama Canal Authority (ACP) chief executive Jorge Quijano. 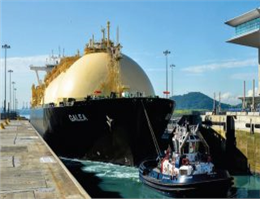 According to MANA, During the past nine months of the operation of the Panama Canal we have seen LNG flows that we never expected a few years back,” he said.
He was speaking on the sidelines of the Sea Asia conference during Singapore Maritime Week.
LPG and LNG are providing additional revenue for the Panama Canal, in addition to the container trades, which represent 50%-51% of its overall revenues.
“LNG will continue to grow. I think that we will probably be doing one vessel per day by 2020-2021,” Mr Quijano said.
According to Quijano, the Panama Canal’s expansion has also brought a shift in trade patterns in the liquid bulk segment.
0
Visit Home
Send to friends
Print
Newsletter
Share this news