President Rouhani stated that the sophistication of Iranian experts and the 20-billion-Dollar investment operationalized Iran’s largest petroleum project in south Pars and its production was officially launched. 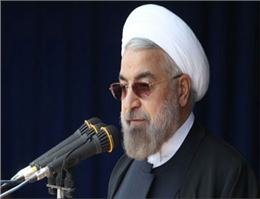 MANA correspondent reported from Boushehr that the Iranian president, Dr. Hassan Rouhani, attended the inauguration ceremony of South Pars projects, expressed his gratitude to Iranian experts in the field, and asserted that he had traveled to Asalooyeh and South Pars four times since his taking office as the president, and each time he witnessed greater honor and pride that emerge thanks to the pertinacious endeavors of specialists, workers and managers.
In his appreciation remarks, President Rouhani expressed that today, we are witnessing the spirt of patience, resistance, resilience and perseverance flourish in our experts. Yesterday, several paramount military industrial and warfare projects were operationalized, the president added, and continued that the simultaneous launch of tens of new plans including land-to-sea missiles, land-to-air missiles, land-to-land missiles, fighter jets and helicopters could bring about the sense of pride and honor for each and every Iranian.
Regarding the decline in the inflation rate, President Rouhani stressed that the 45-percent inflation at the beginning of his presidency is now in single digits thanks to the endless attempts of his administration, and Iran’s economic growth has gone beyond 8 % for the first time after 12 years.
0
Visit Home
Send to friends
Print
Newsletter
Share this news