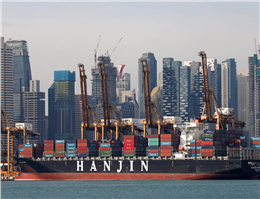 According to MANA, “HSH is looking to lease six ships to Maersk and three to MSC,” one of the people said.
Delivery of the vessels, which each have a capacity to carry around 13,000 containers, will start in December, that person said.
Korea’s Maritime Ministry said Monday that 81 vessels from Hanjin’s container fleet of 97 ships have finished unloading cargo at ports around the world. About nine cargo-laden ships remain stranded at sea, while seven ships are heading back to Korea to berth at Busan and other ports, where Hanjin ships can freely unload cargo without the threat of seizure from creditors.