The director and the head of the board at Islamic Republic of Iran Shipping Line (IRISL) stated that: goods transit and its development as indispensable necessities must be taken into consideration. 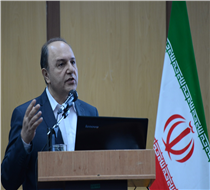 In the First Conference on Commercialization of International Transit and Transportation Services, MANA reported, Dr. Mohammad Saeedi elaborated on the merits and the strategic location of Iran.
Counting coordination and synergistic as indispensable and critical necessities, he added: thanks to the lifting sanctions and the new post-JCPOA era, goods transit should be noticed further.
Stating that Iran in located at a special region in terms of geographically for goods transit, The director and the head of the board at Islamic Republic of Iran Shipping Line (IRISL) remarked: accurate engineering system and smart management of goods transit as well as cooperation among authorities could result in creating added value for the country.
Saeedi referred to that the line to Europe has been inaugurated and we are currently offering services to merchants.
He also proposed: for performing international activities, we have established international joint companies, in this regard, significant Memoranda of Understanding (MOUs) have been signed with major shipping lines, he continued.
Deeming expanding Khazar sea shipping company activities as a proper opportunity for businessmen , Saeedi added: at the present, salianka port near to Astrakhan is managed by IRISL, Which this would facilitate the process of goods transit.
The director and the head of the board at Islamic Republic of Iran Shipping Line (IRISL) counted the development of Chabahar port as a high priority and remarked: in other sectors including container, bulk and general cargo, the approach of utilizing South regions like Asalooyeh, Imam Khomeini Port and Shahid Rajaeei Port has been taken.
Emphasizing the necessity of utilizing foreign investors, Dr. Mohammad Saeedi remarked: it is a fortunate that good projects with considerable profits have been launched in Iran which have been paved the way for foreign investments.
0
Tags: Transit Management Dr. Saeedi
Visit Home
Send to friends
Print
Newsletter
Share this news