Accompanied by a high-held delegation, Norway’s Deputy Secretary of Industry, Trade and Fisheries sat down in a meeting with IRISL director and head of the board at IRISL headquarter. 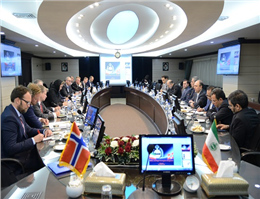 In this meeting, MANA reported, Dr. Mohammad Saeedi, IRISL director and head of the board, met with Dilek Ayhan, Norway’s Deputy Secretary of Industry, Trade and Fisheries, and stated that the two countries have had a long and prosperous history of cooperation in terms of insurance and classification. Thanks to the lifting of the sanctions, Dr. Saeedi added, IRISL managed to reach constructive agreements with two eminent Norwegian companies of DVN GL and SKUL.
Dr. Saeedi further hoped that the volume and the depth of IRISL’s cooperation with the two aforementioned corporations be growingly promoted.
Later in this meeting, Dr. Saeedi asserted that Norwegian companies are enjoy cutting-edge technology and are pioneer in various fields and hoped that the mutual cooperation of these companies and IRISL brings about new commercial opportunities. He added that in the new post-JCPOA era, a new atmosphere has shadowed Iran-Europe relationships, and this is an excellent cue for deeper further collaboration between the two countries.
Emphasizing the importance of close ties between the two countries’ ship owners’ associations, Dr. Saeedi expressed his interest in the joint collaboration of Iran and Norway in ship building and repairs.
Norway’s Deputy Secretary of Industry, Trade and Fisheries, also, expressed his consent with the lifting of the sanctions and the execution of JCPOA. He stressed that currently, everything is ready for the ties of the two countries to return to its normal routines, as it was in the pre-sanctions era.
She then referred to Iran’s remarkable maritime potentials and promising market, as well as the reopening of Norway’s regional office in Iran.
Finally, he hoped that the new post-JCPOA atmosphere leads to extensive collaboration between the two countries, particularly in case of maritime industries.
0
Tags: Deputy Fisheries Secretary IRISL Director norway
Visit Home
Send to friends
Print
Newsletter
Share this news