<![endif]--> The Launching of Gheshem –Oman Commercial and Passenger Line

The Launching of Gheshem –Oman Commercial and Passenger Line

Tourism, Social and Cultural Deputy of Qeshm Trade-Industrial Free Zone announced the launching of passenger and commercial Line between Oman and Gheshem. 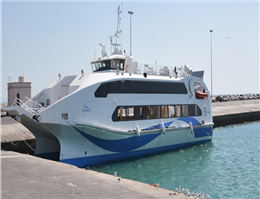 In an interview with MANA reporter, Farzin Haghdel stated: the negotiations for launching this new line have been started from 2011with various domestic and foreign companies.
He continued: eventually,Omani NFC company which enjoys modern and second to none vessels, has expressed its fully readiness and now we are witnessing the launching of this line.
Referring to the Omani tourists coming to Gheshem, Haghdel remarked: direct, quick and legal transit of goods could be considered as one of the main merits of this line which will be attracting for merchants and businessmen.
Pointing out to a good and friendly relationship between the two nations, he continued:the launching of this line would pave a way for enhancing these relationships.
In the end, Tourism, Social and Cultural Deputy of Qeshm Trade-Industrial Free Zone stated: dedicated vessels to this shipping line are able to carry passenger and even cars simultaneously, in other word, it is both commercial and passenger line, he continued.